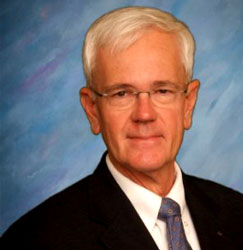 H. Lloyd Harting, a retired federal government civil servant who has served extensively in the Army and Air Force, will be speaking at Christendom College on April 15 at 1 p.m. in St. Thomas Aquinas Hall. Harting, a recipient of the Joint Service Achievement Medal, will relate the secrets to his success, and how students can find similar success and make a difference in today’s world. All students are invited to attend and refreshments will be provided.

Harting received his B.S.F.S. in International Economics from Georgetown University, before going on to acquire an MBA from Western New England College, an AS in Criminal Justice administration and a BS in Management from Park University, and an MPA from Northeastern University.

In 1976, Harting became a U.S. Air Force Officer and served until 1988. He then went on to serve as a civilian employee for the U.S. government, working as a finance technician for the Department of Defense, a supervisory administrative assistant for the U.S. Coast Guard, an immigration inspector for the Department of Justice, and a customs inspector for the Department of the Treasury. He later returned to the Air Force as a reserve officer, serving as a reserve captain, major and lieutenant colonel, as well as a contracts staff officer. He retired from retired from the Air Force reserve in 2006 and went on to work as a civilian employee, specifically as a U.S. Contract Specialist and Contracting Officer at U.S. Army Fort Myer Military Community. He retired in 2008.

Harting has received numerous awards for his service, including the Joint Service Achievement Medal, the Meritorious Service Medal, the Commander’s Award for Civilian Service from the Army, and was featured in the Who’s Who in America in the year 2007.