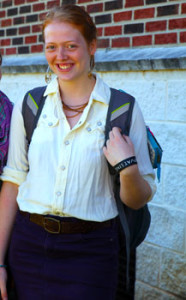 Christendom students continue to rank amongst the best and brightest in the nation, with four students recently taking top spots in a national Latin translation contest, sponsored by the Classical Association of the Midwest and South. Standing out from a group of 602 contestants at the advanced level and 384 at the intermediate level, the students revealed the strength of Christendom’s classical liberal arts education, and the hard work that the college’s academic culture encourages.

This year’s competition saw record-setting numbers of participants at both levels from colleges across the United States and Canada, making the students’ victories even more exceptional.

“The students’ success is a testament, first of all, to their own hard work to achieve exceptional facility in sight-reading Latin—which is the surest index of academic sophistication,” says Dr. Andrew Beer, a faculty member of the classics department. “But the number of winners this year also betokens the lively academic culture of the College, where the study of Latin, the Church’s living language, flourishes.”

Each of the winners are members of the recently formed Christendom College chapter of the national classics honor society Eta Sigma Phi (ΗΣΦ), which seeks to foster the study of the ancient classics, to enhance the appreciation of Greek and Roman culture, and to promote good will and friendship among classical students at the college.

Begun last fall, the students’ placement in the contest marks an important step for the society, which will lead to more participation, and hopefully more victories, in national competitions in the future.

The Classics Department at Christendom College takes pride in allowing its students to excel and display their abilities to contribute to scholarly efforts in society, in intercollegiate competitions and studies.