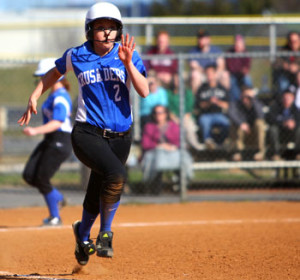 Lady Crusader softball continued their winning streak this past Saturday, splitting a double header against the formidable Patriots of the University of Valley Forge. Energized offensively by a homerun and another impressive outing from sophomore pitcher Mary Solitario, the Lady Crusaders held their own against an experienced Patriots team, heading into their final games of their freshman season this week.

In the first game of the double header, the Crusaders played an impressive game, winning 15-10. The game started out rough for Christendom, after Valley Forge’s pitcher struck out the Ladies’ first three hitters in the top of the first inning.

However, Valley Forge was unable to keep their lead for long. In the top of the third inning, sophomore Bridget Handy smacked a leadoff homer to centerfield. The energy from this incredible hit carried through the rest of the inning, as the Crusaders scored four more runs. Pitcher Mary Solitario was able to hold the Patriots for the next two innings.

The Crusaders scored ten more runs and only allowed the Patriots five more runs for the rest of the afternoon, ending the game 15-10.

During the game, sophomore Mary Arnold continued her offensive dominance, along with senior Susie Adams, both leading the team in batting. Arnold had five hits and scored five runs, while Adams had four hits and four RBI’s. On the pitching side, Solitario struck out six in the first game as well.

The Crusaders plan to take their energy into their final game against Trinity University this Wednesday.