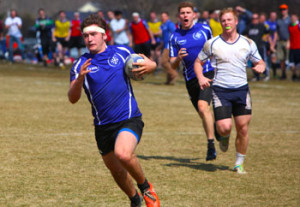 The Christendom Crusaders will travel to Ohio to take on rival the Franciscan University of Steubenville Barons this Saturday, April 18, at 4:00 p.m., in the second annual rugby Shield Match.

The Shield Match, which was held on Christendom’s campus last year, will pit the Crusaders, who are coming off of a four-game winning streak and have a 5-1 record, against the Barons, who have had a phenomenal season, with an 8-1 record. Bringing a team that has yet to concede a single point in the past four matches, the Crusaders look to bring the Shield Trophy back home this year, combining it to last week’s trophy from the Jeff Hewitt Memorial Cup, and the Collegiate Men’s Division Plate from the New York Sevens Rugby Tournament, won last winter.

Looking ahead, the Crusaders will finish the season with a match on April 25 at home against Lord Fairfax Community College, and a final game at West Virginia College on May 2.