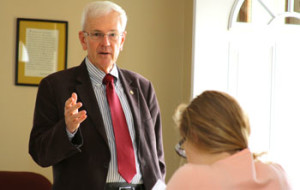 H. Lloyd Harting, an award-winning retired federal government civil servant, spoke to Christendom students as part of the college’s politics practica program speaker series on April 15. A recipient of the Joint Services Achievement Award, Harting related his years of experience in the military and federal government, and spoke on the advantages, and benefits, a government job can provide.

Harting began by first recommending the Federal Employee’s Almanac, a very useful resource for government workers, which can help one find success in government and find a government job in the first place, as well.

Harting made it very clear that he believed a government career is worth considering and pursuing because the work of a public servant is in itself honorable and fulfilling.

The second, more practical reason, is the tremendous amount of flexibility a government job offers.

“There are about 1.3 million people on active duty, and 2 million working as civil servants.  There are many departments and agencies all over the country.  As a government worker, you have the ability to move to nearly any of them,” he said.

He contrasted this with the current situation in the private sector.

“Gone are the days when people stay with a single company for their entire career.  Nowadays, people jump ship a lot,” Harting explained.  “But in a government career, your benefits are cumulative, so you can be rewarded significantly even if you jump to a number of departments or agencies.”

Harting next focused on the concrete benefits of a government career.  In the private sector, even highly desirable corporate employers such as IBM have dropped their pensions.  In the government, however, these still exist, and you can receive several different kinds of pensions.

As a twenty-year veteran of the Air Force and a civil service worker, Harting managed to receive three pensions, allowing him to retire in a very financially comfortable situation.  In the private sector, the situation is typically direr: the average American has less than $50,000 in their retirement nest egg, so if they withdraw about $2,000 a month, their $50,000 will be spent in two years.

“This forces people who are supposed to be enjoying the rest of their lives to return to work.  You cannot rely solely on Social Security: it’s only designed to keep you out of poverty,” Harting said.

Government jobs are also very secure.  In the private sector, there is generally very little job protection.  The government, however, can provide stability if you work in civil service rather than excepted protection service.

Harting ended his talk with steps the students should take to receive a government job.  The first priority should be to graduate from college, since it can be used in the government as a substitute for experience.  He recommended starting a job with the government at low level, and then work up.  Generally, initially, the starting pay is less for an entry-level government employee than a worker in the private sector, but one can quickly go up the pay grade ladder in the government.