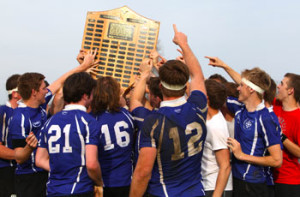 The Christendom Crusaders travelled to Franciscan University of Steubenville this past Saturday, April 18, for the second annual Shield Rugby Match, dominating the Barons in a crushing 57-11 victory. Skillfully outplaying the NCAA Division III Barons throughout the game, the Crusaders took home the Shield trophy for the passionate Christendom fan-base, in the school’s biggest athletic event of the year.

Having narrowly lost 26-23 to the Barons last year in the first Shield Match, the Crusaders were determined to bring the Shield trophy back to campus this year. As the clock struck 4:00, and after team captain junior Pat Audino enflamed the forty-man team, the Crusaders and the Barons took to the field for what would prove to be an extremely physical game.

It was not long until the Crusaders had put the first points on the board, with freshman Daniel Snyman running in to the try zone to score the opening 5-point try.  The Crusaders did not stop there, as they hammered home their lead, bringing the score to 31-3 before half time.

The half-time talk, given by Crusader Assistant Head Coach, and former Steubenville Baron, Jim Conrad, ensured that the boys would not ease off in the second half.  Conrad made a couple of substitutions in the second half, and the Crusaders continued their dominance, with first-year player Joe McMahon scoring two early tries in the final forty minutes of the game.

As the final whistle sounded, the Crusaders stunned the home team with a 57-11 victory, winning the Shield trophy for not only the team, but for the entire Christendom community — many of whom made the four-and-a-half hour drive to Steubenville to support the Crusaders.

“The men continued their fantastic season with a great win against Franciscan,” said athletic director Joshua Petersen.  “It has been very inspirational to watch how hard these guys have worked this year and it has been very gratifying to see their hard work pay off with these great victories.”

Despite the lopsided score, there were no hard feelings between the two teams, and the evening was spent with a social put on by the Barons for players and fans alike. The weekend, as a whole, was spent building relationships between the two Catholic colleges, with the Barons graciously hosting the team, and fans, over the course of the weekend.

The Crusaders, now with an impressive 6-1 record, look ahead to the final two games of the season, playing at home against Lord Fairfax Community College this Saturday, April 25, and on May 2 at West Virginia University – both at 1 p.m.