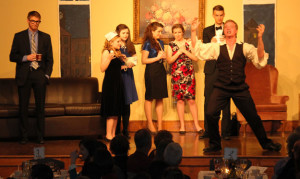 The Class of 2015 presented Christendom College’s annual Mystery Dinner Theater on April 10 and 12, with their original play, “Mental Reservation: The West Wing Story.” Filled with suspense, hilarity, and delicious food, the annual play raised over $7000 for the senior class gift, which will be donated back to the college at the end of the academic year.

Written and directed by seniors Josh Van Hecke and Stephen Hyland, “Mental Reservation” featured an eclectic and talented cast of students from every class, whose original tale of murder at a mental hospital charity dinner received acclaim, and sold-out shows, at every performance.

“Seniors, juniors, sophomores, and freshmen all came together to give the school an entertaining evening while raising money for the senior class gift,” says Hyland. “Between the cast, the set crew, the cooks, and the servers, over 70 students participated to make the weekend a success and an all-around good time.” 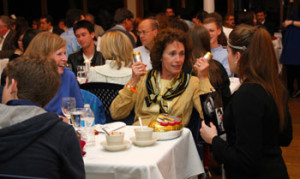 The comedic and dramatic talents of Christendom were out in force for the performances, with each of the characters decked out in elaborate costumes designed by current students. Audience members were delighted by the shows and were able to become a part of the action as well, mingling with and bribing cast members during the show’s intermission for clues as to the killer’s identity.

All of the over $7000 in proceeds will go toward the 2015 senior class gift, which will aid in the renovation of the pavilion next to the college’s main administrative building, Regina Coeli Hall. With the renovations, the pavilion will provide more outdoor space for students, faculty, staff, and visitors to socialize and partake in the beauty of campus.

The funds raised by the annual mystery dinner theater come in addition to the efforts of the senior philanthropy board, which is challenging every member of the senior class to give back to Christendom monetarily after graduation.