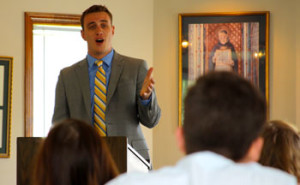 Congressional legislative director Cyrus Artz and the Heritage Foundation’s Colleen Harmon, both young leaders in today’s political field, spoke to Christendom students as part of the college’s politics practica program speaker series on April 20.  Both alumni of Christendom College, Artz and Harmon explained how their liberal arts degrees give them the edge to succeed in politics, and how current students can achieve similar success in internships and jobs rooted in politics and economics.

Artz, who graduated with a degree in political science and economics from Christendom in 2010, works as a legislative director for Congresswoman Virginia Foxx, a representative for North Carolina. He began by giving a detailed explanation of how his liberal arts degree has aided him in the political field.

“My Christendom education has helped me in meeting lobbyists, talking to legislative councils on the creating of bills, and assisting Congresswoman Foxx in vote recommendations. Why? Because of the communication skills I learned,” Artz said.

“Communication is valuable in this field,” he continued. “There are over 720,000 constituents the congresswoman is representing. As a legislative director, I also have to exercise judgment for the staff and correspondents I am responsible for.”

He concluded by explaining to students the importance of making connections in order to get any internship or position in politics.

“Make sure you are doing what you can to put yourself out there,” he advised the students. “Identify leaders in specific fields and talk to them. Make your name known. Be a leader and establish your own goals.”

Colleen Harmon, who graduated with a degree in English from Christendom in 2013, works as an administrative and programming assistant at the Heritage Foundation, a think-tank in Washington, D.C. 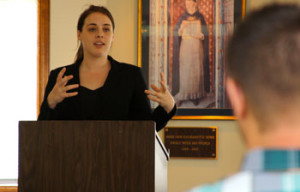 “Think of yourself as a competitor on the job market,” she told the students. “Spend time thinking about what you are going to do for any job or internship you are applying for and then tailor your resume to it.”

She also encouraged the students to work on their studies at Christendom.

“Christendom students are capable of working in the political field,” she said. “In a think-tank, we have to come up with new ideas and continue to innovate in order to create and sell ideas for those who want to stay conservative in government. Keep your sights high. Christendom students are usually self-starters and are wanted on the job market. Take the initiative in a job hunt.”