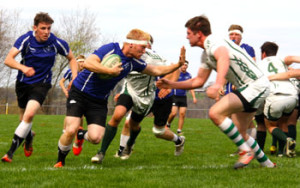 The Christendom Crusaders return to home field this weekend, taking on the Lord Fairfax Community College Lions on April 25 at 1:00 p.m. on Crusader Fields.

Playing on home turf again, after their stunning 57-11 victory against Franciscan University of Steubenville in the second annual Shield Match, the Crusaders come into the game with a resounding 6-1 record, having won their last five games by a combined 204-11 points.

The Crusaders’ trophy case has been filled with three new additions so far this season as well, including the Jeff Hewitt Memorial Cup, the Collegiate Men’s Division Plate from the New York Sevens Rugby Tournament, won last winter, and now the Shield Trophy after last week’s victory.

Looking ahead, the Crusaders will play their final game of the season at West Virginia University on May 2.