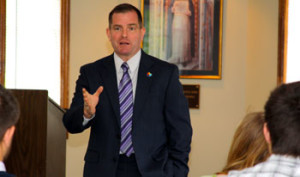 Chris Collins, a current candidate for the Virginia House of Delegates, spoke to Christendom students as part of the college’s politics practica program on April 27. A former member of the Frederick County Board of Supervisors, Collins gave valuable insights into how to run for a political office in today’s world, stressing the importance of strong communication skills in public administration.

Collins, who is also a partner in the law firm of Inger & Collins, P.C., began by relating to the class his plans to run for the Virginia House of Delegates as a representative of Frederick County. Such a move requires not only previous experience in politics, but demands strong communication skills as well — skills that every Christendom student has.

“It’s important to get out there and talk to people. In the local level of government, most of your administration affects people one-on-one,” Collins said. “But, don’t underrate the value of social media as well. The way to get young people interested in voting in general is through technology.”

To students interested in political careers, he emphasized the importance of first gaining political experience at the local level, in order to become better aware of all levels of public administration. Collins’ previous experiences in local politics, both as a deputy sheriff and as a firefighter, helped to give him the necessary skills to be able to function in the best way possible at any administrative position.

His strong communication skills, earned through his education and career in law, plus his experience in local politics, helped gain Collins a seat on the Frederick County Board of Supervisors, where he served the community from 2010-2015.

“Since I’ve spent five years working on the local level of policy, I have a better understanding of how much my decisions on the state level will affect the people I am representing,” Collins concluded. “I’m doing it for love of the community.”