Christendom Players Thrill Audiences with And Then There Were None 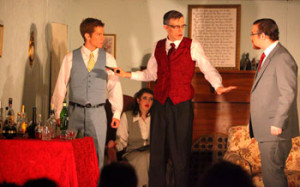 The Christendom College Players outdid themselves on the stage this past weekend, April 24-26, with their performances of Agatha Christie’s famous murder mystery, And Then There Were None. Featuring a  cast of current students and alumni, the adaptation of the gripping thriller brought together the best in Christendom’s dramatic talents, enthralling and terrifying audiences at every performance.

Directed by alumni Andrew Clark (’14) and Mary Harrington (’11), the play chronicled the horrors of a weekend trip turned murder mystery, featuring ten guests who were gathered in an island home under false pretenses.

“The cast was a real ensemble — the emphasis was on the group, not just individual stars, both on and off the stage,” shared English professor Dr. Patrick Keats, who produced and was assistant director for And Then There Were None.

This spring semester’s performance was the 36th play Keats has organized and helped direct at Christendom, alongside his regular teaching position as one of the school’s primary English professors.

“The plays allow students to study literature in a different kind of way—to interpret it,” Keats said.  “Through the plays, the cast and audience are exposed to different kind of literature they may not encounter in the curriculum, or may not have learned about otherwise.”

Though the core curriculum keeps underclassmen incredibly busy, sophomore Brendan Williamson, who played Anthony Marston in the production, feels it is of great importance to make time to participate in the plays, to show students that “in a decadent world we can provide entertainment that’s good.  I believe it does have a deep impact on people’s lives, having experiences like this.”

Fellow cast member Katherine Williams, performing in her second Christendom play, shared his sentiment, and described her experience as “inspirational,” noting that, even amid the hectic life at Christendom, being in a theatrical production is completely worth it.

The Christendom Players performed tremendously, representing a valuable facet of the liberal arts education, which enabled each actor to represent their characters more authentically, using their critical thinking skills to create realistic reactions to artificial problems, and convince the audience that they, too, were in danger of becoming the next victim in the dramatic mystery.

While Christendom does not have a drama department, students from across all disciplines are welcome to audition for the performances, making Christendom’s liberal arts experience rich in the fine arts as well.