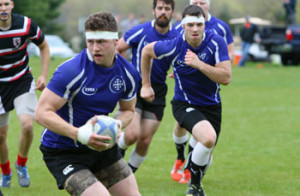 The Christendom College Crusaders will finish their impressive rugby season when they play men’s D1AA West Virginia University, in Morgantown, WV, on May 2 at 1:00 p.m.

Coming off a crushing defeat of crosstown rival Lord Fairfax Community College at home, the Crusaders enter the game with a stellar 7-1 record, including winning their past six games in a row. They face their toughest opponent of the year this Saturday, West Virginia University, who recently fell in the East Regional semi-finals of the College 15s Rugby National Championships. The WVU Mountaineers won the Rugby Keystone Conference earlier this season, and will be joining D1A Rugby next fall.

The young Crusaders rugby team has played an impressive season thus far, under the guidance of returning head coach Theo Smith, and assistant coach James Conrad. In addition to their current winning streak, the Crusaders conquered Mount St. Mary’s University at home in an exciting comeback win earlier this year, 39-27, before winning the Shield Match against rival  Franciscan University of Steubenville 57-11 later in the season.

The Crusaders’ trophy case has been filled with three new additions so far this season as well, including the Jeff Hewitt Memorial Cup, the Collegiate Men’s Division Plate from the New York Sevens Rugby Tournament, won last winter, and now the Shield Trophy as well.