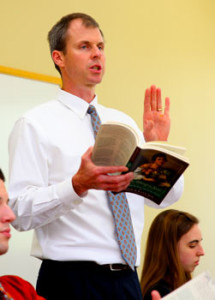 Christendom College philosophy professor Dr. John Cuddeback and Dr. Christopher Blum, academic dean of the Augustine Institute, recently published Nature’s Beautiful Order: An Introduction to the Study of Animals Taught by the Classical Naturalists, a natural history textbook that examines the history of animals through the lens of classical naturalists. Published by Memoria Press, Nature’s Beautiful Order is intended for students of middle-to-high school age, and acts as a counter to the reductionist and mechanistic theories characteristic of modern biology.

Driven by a love of nature and the beauty of God’s creation, Cuddeback and Blum study the phenomena of animals according to a classical approach to biology. They examine the parts of animals, give measured accounts of their causes, and reflect upon their goodness and ends in eighteen lessons, with the help of the great observational biologists John-James Audubon, Jean-Henri Fabre, and others.

“We realized there was a broader interest, and a broader need for this work,” says Cuddeback, who is a professor and chairman of the philosophy department at Christendom College. “Given the theory-laden approach of most biology textbooks today, we wanted to provide a study that focuses on living things as they actually are, a study that encourages a humble and truly scientific approach to the natural world.”

Nature’s Beautiful Order seeks to set a standard for other biology textbooks, providing students with the ability to distinguish between fact and ideology, observable reality and theory, well-framed definitions and metaphors.

“This study also serves as a great preparation for higher scientific and philosophical studies,” says Cuddeback, who has previously published Friendship: The Art of Happiness.

The work has already received acclaim from leading academics, including Michael Hanby, Ph.D., associate professor of religion and philosophy of science at the Pontifical John Paul II Institute. Hanby writes, “Christopher O. Blum and John A. Cuddeback have restored the scientific and empirical study of nature to its true foundation and returned wonder to its proper place in the study of living things.”

Nature’s Beautiful Order is available now from Memoria Press. To purchase the book, or to find out more information, please visit memoriapress.com.