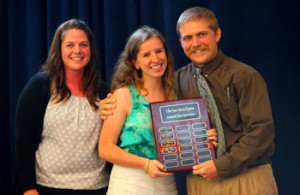 Christendom College held its annual awards luncheon this past week, honoring the exceptional academic achievements and volunteer services of select seniors graduating with the Class of 2015 this coming weekend. With six awards given out, the awards luncheon recognized the best of this year’s graduating class, leaving them as examples for the underclassmen.

“We are here to recognize the excellence and important achievements of the students here at Christendom. It’s important to come together as a community to acknowledge this, for you are all pursuing something truly noble and good with the education you are undertaking here, leading toward the acquisition of wisdom,” said college president Dr. Timothy O’Donnell, who opened the luncheon.

The Student Activities Council’s (SAC) Joe McGlynn Award for Service was given to Michael Kopp. Demonstrating significant leadership and hard work behind the scenes at over sixty college events, Kopp exemplified the selfless giving spirit that is a trademark of Christendom’s SAC — one of the most active in the nation. 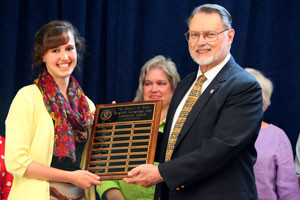 The English department’s Robert C. Rice Award for Outstanding English Language and Literature Thesis was awarded to Melody Wood, a member of the college’s Cincinnatus League and a campus resident assistant. Her thesis topic, “Colossal Vitality of Illusion”:  A Comparison of the Flight from Reality in F. Scott Fitzgerald’s The Great Gatsby and Evelyn Waugh’s Brideshead Revisited, distinguished itself by revealing outstanding scholarship, collegiality, and written success. Wood also double majored in philosophy. 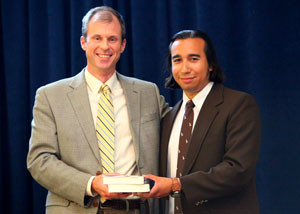 For the philosophy department’s Outstanding Senior Philosophy Major Award, department chairman Dr. John Cuddeback recognized Joseph Gonzalez, who “reminded us all exactly why we do the things that we do here, showing excellence not only in the classroom, but also by a love of wisdom outside the classroom as well.” Gonzalez wrote on why Cartesian Epistemology is not Platonic:  A Response to Dr. Stephen Buckle’s Paper “Descartes, Plato, and the Cave.” 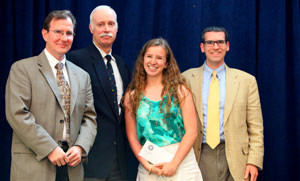 The history department’s Warren H. Carroll Award for Outstanding Senior History Thesis was given to student body president Katie Brizek for her thesis titled The End of Suffering: A Study of Traditional and Post-Enlightenment Concepts of Suffering’s Purpose, a model of philosophical history which exemplified the historical scholarship standard set by Christendom’s founder, Dr. Warren Carroll. 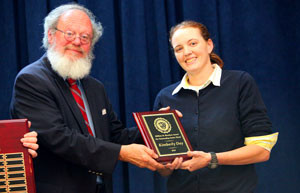 Kimberly Day was awarded the William H Marshner Award for her thesis titled Is Karl Rahner’s Foundations of Christian Faith an Attempt to Present Catholicism in Conformity with Kantian Philosophy?, while Stephen Snyder was awarded the Outstanding Senior Political Science & Economics Thesis Award for his thesis on How the Misuse of Technology has Detrimented Man’s Relationships.

The annual awards luncheon is held to recognize the best and brightest of each graduating class at Christendom College, acknowledging their academic and leadership achievements before the entire Christendom community.