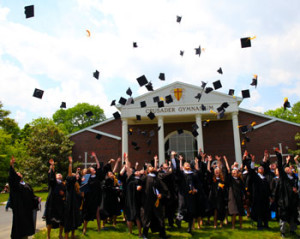 Christendom College will celebrate Commencement Weekend on May 15-17, honoring the historic one-hundred and two members of this year’s graduating class with Bachelor of Arts degrees. Renowned author, and Catholic luminary, Alice von Hildebrand will give the commencement address at this year’s ceremony, while the Most Reverend Paul S. Loverde, Bishop of the Diocese of Arlington, Va., will be the main celebrant and homilist for the Baccalaureate Mass. Both will be recognized and honored with awards at the ceremony on May 16.

At the commencement ceremony on May 16, Dr. von Hildebrand will be awarded the St. Catherine of Siena award before delivering her address to the graduating class.

“Dr. von Hildebrand has been a great defender of our Catholic faith and all that is true, good, and beautiful. Her life has been filled with a powerful witness to the truth of faith and natural reason, and she has dedicated her life to Christ and His Church. I cannot think of a more worthy recipient of the college’s Catherine of Siena award,” says college president Dr. Timothy O’Donnell.

Bishop Loverde will be the main celebrant and homilist for the Baccalaureate Mass on May 15, before being bestowed with an honorary doctorate at the commencement ceremonies on May 16.

“Bishop Loverde has been a great friend and supporter of the educational mission of Christendom College over the years. His leadership of the Catholic Diocese of Arlington has been truly inspirational and marked by a joyful fidelity to the Church and Her teaching mission,” says O’Donnell. “It will be a tremendous joy and honor to welcome him to our commencement and bestow on him the College’s honorary doctorate of humane letters.”

For more information on this year’s Commencement, please visit here.