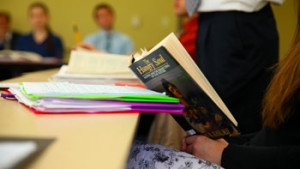 In a recent article posted on The Chronicle of Higher Education, author Cecilia Gaposchkin asserts what survey after survey has reported in recent years: getting a fulfilling career is not necessarily linked to a specific major or specific content learned, but rather the abilities to think critically, communicate well, and be adaptable — all of which are learned through a proper liberal arts education.

“The premise that choosing a major is choosing a career rests on the faulty notion that ‘the major’ is important for its content, and that the acquisition of that content is what’s valuable — meaning valuable to employers,” writes Gaposchkin, who is the associate professor of history and assistant dean of faculty for pre-major advising at Dartmouth College.

“[M]uch of the information acquired in 2015 will be obsolete by 2020. What is valuable is not the content of a major, but rather the ability to think with and through that information. That is the aim of a liberal-arts education, no matter the major,” she writes.

“Ask employers. Company representatives who recruit at my college consistently say they don’t really care about someone’s major. What they want are basic but difficult-to-acquire skills. When they ask students about their majors, it’s usually not because they want to assess the applicants’ mastery of the content, but rather because they want to know if the students can talk about what they learned. They care about a potential employee’s abilities: writing, researching, quantitative, and analytical skills. Some majors teach and hone some of these skills more than others do. Some career paths will use some more than others. But almost all white-collar jobs will require writing, communication, assessment, numeracy, and above all the creative application of knowledge,” she says.

She advises not to necessarily connect a student’s major with his or her future career choices because, quite often, students change their minds in college, due to increased self-awareness and opportunities they’ve had. She lists many successful alumni who, like 73% of other college graduates, are working in a field outside their major.

Gaposchkin then goes to the heart of the problem with selecting a major for the sole purpose of getting a job in that field, and that is that it is ruining the intellectual life at college.

“As students flock to the two or three majors they see as good investments, professors who teach in those majors are overburdened, and the majors themselves become more formulaic and less individualized. A vocational approach to liberal-arts education eviscerates precisely the qualities that are most valuable about it: intellectual curiosity and passion,” she says.

She summarizes a recent report that states that college seniors majoring in liberal arts “may be better critical thinkers than those majoring in business. It is thinking within and with a discipline, idea, or problem that pushes the mind toward the creativity and confidence that underlie productive and informed action.”

In conclusion, she suggests that students should be allowed to study what they are truly interested in, rather than studying a subject because they think it will get them a job.

“By releasing students from the pressure of the practical major and allowing them to study what they are sincerely interested in, we allow them to become smarter, more creative, and more able. This is what potential employers value, not course content that is likely to be obsolete once they have finished training the recent graduate,” she concludes.

Christendom College’s broad-based liberal arts curriculum is exactly the type of education that allows students to become the person God has called them to become, and to gain valuable skills that will enhance their personal and professional lives, and enable them to achieve greatness. With a focus on writing, the study of philosophy and theology, research skills, oral communication, and more, Christendom alumni are well-prepared for the job market, but more importantly, well-prepared for life — and to succeed in it.