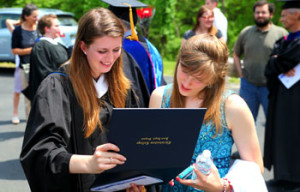 graduates, especially those of Christendom College, are leaving school with these tools in hand — including problem-solving, or critical thinking skills.

Understanding how to solve problems creatively and think outside the box is essential to employers; otherwise, workers are closer to “cogs in the machine” than valuable assets to a company. In an article for the Huffington Post, Linda Katehi, Chancellor of UC Davis, affirms this by saying that, while companies need engineers, the future of them rests on liberal arts majors who can think critically.

“Leading information-based companies will always need bright young engineers and other technical experts to solve problems. But they need more people who know how to think across boundaries, integrate information, identify social and cultural trends, acquire data in support of their ideas, crunch it and present it in a clear and compelling way,” she writes.

“We need greater creativity, aesthetic sensibility, social, political and psychological insights. Which is another way of saying, more liberal arts.”

Gaining these invaluable critical thinking skills is a hallmark of a Christendom liberal arts education. Every student must study and integrate all of the disciplines taught in the 86-credit hour core curriculum, including a detailed analysis of the philosophy of human nature at the beginning of their academic career.  By investigating the nature of man, through the classical works of St. Thomas Aquinas and Aristotle, students figure out how to solve the profound problem of why men act toward evil ends, and discover ways to better lead both themselves and mankind as a whole toward their better ends in the future.

These challenges to solve history’s greatest problems continue across all of the disciplines throughout the students’ four years. In their history of western civilization classes, students examine the many causes of the American Revolution and determine whether or not it was a philosophically just war, while in Catholic apologetics they learn how to form intelligent arguments to defend the credibility of Catholicism against its critics.

“Our students are challenged to study the many parts, while at the same time, to see the whole, and, determine how they all fit together in the canon of Western Civilization. That’s why our students find so much success: they’ve already been given the tools to integrate and think critically across all the disciplines, making them the best possible candidates for leading in the workplace later in life,” says vice president for enrollment Tom McFadden.

“Employers are not looking for ‘yes men,’ but rather for people who are willing to go out on a limb, and think critically about a topic, analyze its value to the company, and the communicate these findings in an innovative and passionate manner. When so many other graduates are lacking these abilities, Christendom graduates stand out from the pack even more,” says McFadden.

According to the Council for Aid to Education, 40% of college seniors are deficient in problem solving skills. At Christendom, the challenging curriculum results in students who know how to think critically and express their thoughts clearly on a multitude of subjects.

Studying Latin, reading Plato’s Apology, working out problems in Euclidean Geometry, discerning the truth behind historical figures’ actions, commenting on Aquinas’ Summa, discovering the value of redemption in Dostoyevsky’s Crime and Punishment, and uncovering the truths of Catholic social teaching in the great encyclical Rerum Novarum – all of these are opportunities to exercise the brain and encourage Christendom students to think deeply and critically about life’s greatest questions. This in turn enables them to bring that new philosophical habit of mind to the public square and help others to come to reasonable, rational, and innovative decisions.

This is part three of a series focusing on the skills every graduate needs to succeed after college, which Christendom College provides for its students. Learn how Christendom equips its students with leadership skills in part four of this series at christendom.edu/news.