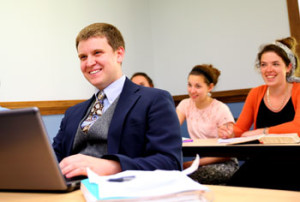 According to a recent survey by CareerBuilder, college graduates are missing the crucial skills needed to find success after graduation, with the lack of strong leadership skills being most noticeably absent. Christendom College students, though, are gaining these valuable leadership skills prior to graduation, thus making them even more attractive to future employers. In fact, in a study released today (which gathered information from 1709 leaders in 30 countries), it was found that 55% of today’s business leaders internationally hold a degree in a traditional liberal arts field.

But what makes a leader? How are leaders formed through their educational experiences?

In an article for Inside Higher Ed, author Mark Peltz, dean for the center of careers, life, and service at Grinnell College, relates how liberal arts colleges are excelling at providing students with the means to become leaders, pointing to the fact that many of today’s leading politicians, businessmen, and CEOs come from a liberal arts background.

“Today, perhaps more than ever, our nation’s leaders need to be able to strategically think and plan, deftly interpret changing global conditions, effectively marshal expansive resources and collaboratively guide teams of diverse people. Students at liberal arts colleges are challenged and supported to cultivate these skills throughout their coursework and co-curricular activities and then apply them during undergraduate research projects, volunteer experiences, and internships,” Peltz says.

The main qualities that set a great leader apart from a good leader are dedication, integrity, magnanimity, humility, confidence, and creativity – all qualities promoted during a student’s four years at Christendom.

Christendom students abide by a number of residential policies which help them learn integrity by aligning their words and actions with their inner values, and sticking to these values even when an alternative path may be easier or seem more advantageous. Also, there is an expectation on campus for people to be honest and trustworthy in all of their actions.

They are eager to do all that they can in their classes to attain success, even to the point of great sacrifice, which shows their dedication to their vocation as a student. And when they get involved in extra-curricular activities such as putting on events, running clubs and organizations, or playing sports, Christendom students are dedicated to making sure that they give their all to their ventures.

Through the sports programs, both intramural and intercollegiate, as well as through the Chester-Belloc Debate Society and in the classroom, students learn to be magnanimous by being gracious in defeat and allowing others who are defeated to retain their dignity.

Through the moral and spiritual formation programs on campus, students certainly learn to be humble, recognizing their own faults and coming to an understanding that they are not inherently superior to others and consequently that they are not inferior to others.  They learn true humble leadership in that they recognize all people as equal in value and know that their position does not make them a god.

In their in and out of classroom pursuits, Christendom students learn to be confident individuals, by achieving success in the rigorous academic program, through leading others in their clubs and organizations, and through their on-campus jobs and internships.  At graduation, Christendom students have the much-needed confidence to take on anything that comes at them, and are eager to work hard.

And finally, Christendom students are encouraged to be creative through the writing of papers, and in classroom discussions of the many great works of Western Civilization. They learn to get outside the box and take new and different viewpoints on things.

With its broad-based liberal arts curriculum, Christendom College cultivates these much-needed abilities in every student. In the classroom, students must plan ahead and organize their thoughts for every test, paper, and project in order to succeed. Outside the classroom, this education in leadership extends to on and off-campus internships, leadership projects, and learning from fellow alumni in the Life on Tap networking series, thanks to Christendom’s robust career and leadership development office. On top of all of that, the semester that the juniors spend in Rome broadens their horizons, enabling them to have a better understanding of different people and cultures, thus giving them an edge when they become leaders,

Students also have ample opportunities to gain these leadership skills in other areas of on-campus life, through being a resident assistant, student ambassador, member of the student activities council or sports teams, or through participation in the many cultural and recreational student-led clubs and organizations.

This is part four of a series focusing on the skills every graduate needs to succeed after college, which Christendom College provides for its students. Learn how Christendom equips its students with oral communication skills in part five of this series at christendom.edu/news.