The Study of Liberal Arts Produces Great Communicators at Christendom 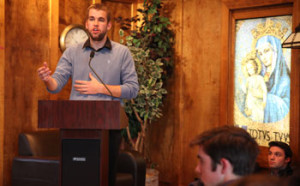 Students who recently graduated from college are transitioning into a workforce eager to hire them — but, only if they have soft skills, such as people, written communication, leadership, and critical thinking skills. Amongst these skills, oral communication is a highly sought after ability that many graduates now lack. As they move into the next phase, graduates with a liberal arts background, especially from Christendom College, can rest assured that they have the proper speaking abilities to thrive after college.

The best oral communicators understand how to speak clearly and concisely, get specific when representing facts, and also how to listen well to others in order to know how to respond to them. CNN Host, and author of In Defense of a Liberal Education, Fareed Zakaria affirms this truth, saying his specialized education in India failed to prepare him for success in America. Instead, the key skills of writing, learning, and especially speaking came from the liberal arts education he received later.

“The…great advantage of a liberal education is that it teaches you how to speak and speak your mind. One of the…contrasts that struck me between school in India and college in America was that an important part of my grade was talking. My professors were going to judge me on the process of thinking through the subject matter and presenting my analysis and conclusions – out loud. Speaking clearly and concisely is a big advantage in life,” Zakaria says.

Thanks to a focus on giving students strong memorization skills, rather than teaching them how to think critically about a subject, many of today’s graduates excel at regurgitating information but fail at expressing their own individual ideas clearly. The liberal arts curriculum and extra-curricular activities at Christendom College reject this focus, instead giving students the abilities to speak clearly, give specifics, and listen well that give them an edge in the job market after college.

At Christendom, in the classroom, the students are given a certain percentage of their grade for class participation, which encourages the students to fully engage in the subject matter. The professors encourage students to actively listen to lectures and take notes, in order to think critically about how to best respond when asked a question. The need to listen well becomes especially prevalent in seminar classes — a feature often utilized at Christendom due to its size. In a classroom of about twenty people, students can add their thoughts and insights to those of the professor and fellow students through their own thoughtful questions on a subject, listening intently to each other in order to gain the most from the experience.

When giving specifics, students need to be able to speak clearly and concisely as well. Christendom teaches this ability both in and outside the classroom, thanks in part to the college’s Chester-Belloc Debate Society. A student-run organization, the debate society meets several times throughout each semester, providing students with the opportunity to sharpen their intellectual wit and communicate their own ideas on a subject clearly and concisely to their peers, in a professional setting.

This important ability is also taught in the many leadership roles on campus, where students need to communicate well with others in order to lead them properly. Whether it be in varsity or intramural sports, as a resident assistant or ambassador, as a member of the student activities council or as a member of one of the college’s many clubs and organizations, students learn how to speak clearly to their peers, the faculty, and the staff during their four years at the college, giving them an advantage socially and professionally both at the school and beyond.

With its broad-based liberal arts curriculum, Christendom College cultivates these much-needed abilities in every student. By learning how to orally communicate properly, Christendom graduates excel in job interviews and in the workforce. Rather than simply regurgitating facts, they are able to express their thoughts in a clear, professional manner grounded in their Faith.

This is part five of a series focusing on the skills every graduate needs to succeed after college, which Christendom College provides for its students. Learn how Christendom equips its students with written communication skills in the final part of this series at christendom.edu/news.