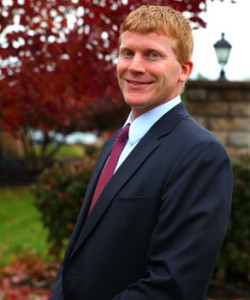 People who work at Christendom College believe strongly in the mission of the institution to “restore all things in Christ,” and are convinced that the rigorous liberal arts education offered to the students is the answer to many of today’s biggest problems. This dedication to a faithful, Catholic form of higher education attracted new philanthropy officer David Costanzo to the college last fall, as he seeks to further Christendom’s mission with the help of her many benefactors.

“I am inspired by those who have built the foundation of Christendom and look forward to personally inviting our faithful Catholic supporters, past, present and future, to become more intimately involved in the necessary, successful, and expanding mission of Christendom College,” says Costanzo.

More than 20 years ago, Costanzo carefully watched his father begin to build a million dollar family business in technology component sales and then further develop commercial real estate holdings. What caught Costanzo’s attention most was not only his father’s drive in business, but, in particular, his constant desire to help further the urgent work of evangelization in the Catholic Church.

Earning his B.S. in business administration from Franciscan University of Steubenville in 1997, Costanzo spent many years laboring in both paid and volunteer positions, advancing ministries and apostolic works of the Catholic Church, especially for youth and men’s ministries.

Costanzo, who most recently completed six years of service as the director of external relations for The Cardinal Newman Society, felt it was a natural progression to go on to serve the mission of Christendom College. Like his father, Costanzo holds a deep love for his Catholic faith, and understands that faithful Catholic education is a key ingredient of the new evangelization. He is excited to partner with the benefactors of Christendom College and looks forward to laboring beside them.

Costanzo resides with his wife, Dawn, and twin daughters in northern Virginia. Contact David Costanzo by email at david.costanzo@christendom.edu or by mobile phone at 703.869.1169.

This story is taken in part from the spring edition of Instauraure, Christendom College’s quarterly. To read more or subscribe, please visit christendom.edu/news/instaurare.