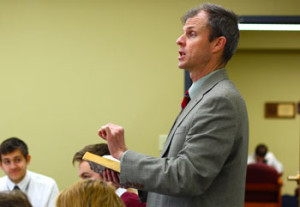 Christendom College philosophy professor Dr. John Cuddeback will deliver a lecture on Thursday, June 25, at 7:30 p.m. at St. John the Apostle Church Hall in Leesburg, Va. Sponsored by the Institute of Catholic Culture, Cuddeback’s talk is titled  “Walking With Faith: A Study of the Rule of St. Benedict.”

Considered to be the foundation of Western Civilization and spirituality, the Rule of St. Benedict has influenced the lives of many with its fundamental principles of the spiritual life, especially regarding prayer, humility, and work. While it is no longer taught at many colleges and universities, it remains one of the key texts of Christendom College’s core curriculum.

Cuddeback earned his B.A. in philosophy from Christendom College, and received a Ph.D. in philosophy from The Catholic University of America in 1997. He is a popular writer and lecturer on various topics including virtue, culture, natural law, contemplation, and friendship. His book Friendship: Where Virtue Becomes Happiness was re-published in 2010 by Epic Publishing. Recently, Cuddeback co-authored a new biology textbook Nature’s Beautiful Order: An Introduction to the Study of Animals Taught by Classical Naturalists, published by Memoria Press. A Third Order lay Dominican, Cuddeback lives with his wife and six children in the Shenandoah Valley.

St. John the Apostle Church is located at 101 Oakcrest Manor Drive, N.E., in Leesburg, Va., 20176. Admission is free and no reservation is required. For more information, please visit instituteofcatholicculture.com. Download the flyer here.