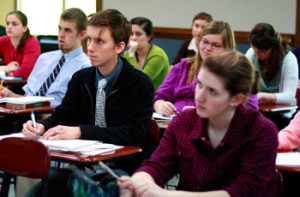 In a recent article for Money.com, Wharton School of Business professor Peter Cappelli talks about the new fad in education today which encourages students to select a very narrow field of study and how that is not always the best decision.

“A big move on many college campuses has been the proliferation of degrees and majors that sound just like job titles: Golf course operations, screenwriting, pharmaceutical marketing, you name it. There is no official count of these majors, but websites like mymajors.com list more than 1,800, along with the colleges that offer them,” he writes.

Although people have been getting specialized degrees in areas such as business and engineering, it is only now that the majors seem to be more focused on an actual job title, rather than a field of study.

“There are many good reasons why attending college to prepare you for specific jobs is a bad idea,” he says. “The first one, which is pretty basic, is that it’s almost impossible when picking a college to predict what the job market will look like years later at graduation, especially recognizing that only 40% of full-time students graduate in four years. What will you do with that casino management degree if gambling is down the year you graduate and casinos aren’t hiring? You might well be better off with a broad, liberal arts degree.”

He explains that this unpredictability in the job market can even affect so-called STEM degrees.

“Contrary to conventional wisdom, it turns out math and science degrees per se are not and have never been particularly hot. A recent Texas study found, for example, that sociology grads made more money than biology grads. Instead, it has generally been applied science degrees like engineering that have been gone through periods of huge demand—but even within those broad fields, what’s hot at any given moment varies sharply over time.”

Cappelli then turns his attention to employers, and what they are looking for in new hires.

“Most tellingly, employers don’t seem all that interested in vocational degrees. When asked about new grads, employers report that they are probably overqualified with respect to the job skills the employers expected them to have and underqualified in the areas we thought college was supposed to address: communication skills, interpersonal abilities, and self-management.”

According to recent surveys, employers were expressly looking for employees who had previous work experience, and less concerned with what the person’s major was in college. This is important because, according to the survey, only 25% of new graduates, and 27% of people overall, end up working in their field of study.

“The truth is, it isn’t necessary to have a degree in a field to get a job in that field. Most computer programmers, for example, have no IT-related degree,” he writes. “A few specific classes and some real-world experience, even if as a volunteer, may be enough to get a job in most fields, and those actions can be taken much closer to graduation when it is possible to tell where the jobs are.”

He concludes his article by showing that, in the end, it is more likely that a person who received a broad liberal arts education, like the one offered at Christendom College, will be more successful in life.

“How about the long-term, after that first job? Taking all the practical courses for a vocational major means there are other courses one cannot take that might be better preparation for the long run. Economist Ofer Malamud did an interesting study comparing English college grads, who typically study only one subject in college, to Scottish grads, who take a broader mix of courses before focusing on a specialization. He found that the English grads changed careers more often (possibly because they knew less about alternatives) and had more difficulty making those changes (possibly because of narrower preparation) than did their Scottish peers.”

Christendom provides a timeless and challenging Catholic liberal arts education. It is the same education received by the scientists, scholars, heroes, and saints that have marked the 2000-year history of Christendom. By seeking the truth through various disciplines, the students cultivate a new intellectual power enabling them to master any subject. They attain an intellectual prowess in which they can take up any career and thrive with competence, grace, versatility, and success.