Student Swaps Zucchettos with Pope Francis During Semester in Rome 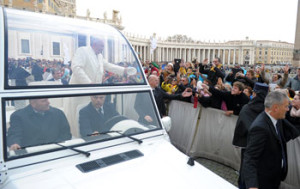 Students who embark on Christendom’s junior semester in Rome program often call it the highlight of their college career, citing the culture, classes, and friendships formed as an unforgettable life experience. For senior Bradley Torline, his semester abroad hit its pinnacle with something more unique: swapping zucchettos with Pope Francis.

”For as long as I live, I will always be able to say I swapped zucchettos with Pope Francis — something that would never have happened if I hadn’t gone to Christendom College,” says Torline.

“It was my last Wednesday in Rome, my last papal audience, and I found myself jogging with my umbrella through the cobblestone streets of Rome in the predawn hours, past the cafés, which hadn’t opened yet, and then along the walls of Vatican City until I finally reached St. Peter’s Square. I was relieved to find a group of Christendom students already there who were able to hold a place at the front of the line. A few hours later, followed by a mad rush through some metal detectors, I found myself in the front row of the Wednesday papal audience, nestled between my Christendom comrades and a Philippino-Italian woman named Eugene, who spoke great English.

I’ll never forget the moment I saw the man in white coming around the corner in the ‘pope-mobile.’ The crowds went wild, as the Supreme Pontiff began smiling and waving, making eye contact with every person in the front row. ‘Papa! Una Zucchetto per Lei!’ I shouted, in uncertain Italian. He made eye contact with  me and smiled, but the pope-mobile passed me by. I wasn’t worried, though — this wasn’t my first papal audience. I knew he would drive by at least one more time. It was harder to stay optimistic the second time I was passed up, however. A Swiss guard who was helping me out (and who I actually ran into at a pub later that very same night) reassured me, so I prayed, enjoyed the audience, and stood, ready to give  it one last shot, as the Vicar of Christ descended from the steps and mounted the pope-mobile for a last run around the block. 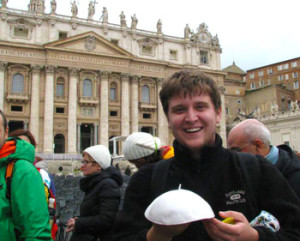 Suddenly, he ordered the car to stop and reached for the zucchetto in my hand. I lost all dignity and became a six-year old boy. Tears in my eyes, jumping up and down frantically, I shouted, ‘Grazie Papa, grazie, grazie mille!’ over and over — in English, ‘Thank you, Papa, thank you, thanks a million.’ The Vicar of Christ laughed at me as he placed the zucchetto I had bought on his head. Clutching the one he had given me, I regained my composure, and was able to say one more thing, ‘Papa, prega per la mia mama, per favore’ — ‘Holy Father, please pray for my mom.’ He nodded solemnly at me, and drove away.

My new friend standing next to me, Eugene, sobbed, shouting, ‘You are so lucky!’ and grabbed the zucchetto from me. She put it on her own head, tears rolling down her cheeks. It was one of the best moments of my life, and the crowning moment of a life-changing semester.

I would be lying if I told you that Christendom’s Rome program wasn’t one of the top motivating factors that compelled me to attend the college. Besides the solid liberal arts education, it was most certainly the top reason. I was practically in tears when, as a visiting high school senior, Tom McFadden, who was then the Director of Admissions, showed me a slide show explaining the program. Some three years later, having completed the program, I can now say it was better than I ever imagined it would be.

From the first week of the program, in which we wandered the picturesque medieval streets of the spiritual oasis that is Assisi, to the last day in Rome when I climbed the Dome of St. Peter’s, gazed across Rome to the horizon and felt the majesty and power of the Church as never before – those were the best three months of my life.

The pasta, the ambiance of the Roman streets at night, the architecture, the relics, the history, the art, the gelato, the wine — words simply can’t describe it. Lasting friendships were forged in my class, as we studied together in the classroom, prayed together at the holy sites, drank wine together in the piazzas. Whether it was struggling  with a foreign language, or mastering the hectic Roman transportation system, we were forced to grow as individuals, and in doing so gained unspeakable confidence in ourselves, as we accomplished things we never thought we could.

Most important of all, however, was the spiritual effect of the experience. How does one describe what it is like to stand  in the Coliseum and meditate on the experience of the early martyrs, or how it feels to attend Mass at the tomb of Pope St. John Paul II? How can I tell you what it was like when all of the Christendom students’ knees hit the ground as we prayed together, gazing at the bones of the Fishermen, the relics of St. Peter under the famous altar that bears his name? It’s impossible.

The only fitting response is gratitude, and I think I speak for all of us who have participated in this program throughout the years in saying that, until the day I die, I will be thankful to Christendom College, and to all those who made this experience possible.”

This story is taken from the spring edition of Instaurare, Christendom College’s quarterly magazine. To read more or subscribe, please visit christendom.edu/news/instaurare.