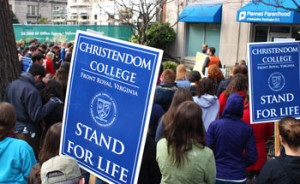 After years of prayerful protests, one of Washington D.C.’s Planned Parenthood abortion clinics is shutting down, according to a statement posted on the door to the clinic. Christendom College’s student-run pro-life organization Shield of Roses has been praying and counseling women in front of the 16th Street clinic for years, with nearly half of the student body coming out annually to protest in the annual “Mega Shield” events.

In the statement, Planned Parenthood does state its intention to open another clinic in D.C. later this year, but Troy Newman, president of the pro-life organization Operation Rescue, believes this is far from a done deal.

“It may be many months before a new facility is ready, if ever. In the meantime, Planned Parenthood will not be killing babies in the nation’s capital, and that is great news,” said Newman, in an article for Lifesite News. “While Planned Parenthood is closed, we know it will be losing money. The longer it is closed, the harder it will be to reopen.”

Shield of Roses has prayerfully protested in front of the clinic each Saturday morning during the academic year for over a decade, with its leaders often awarded ‘Volunteer of the Year” awards by the Diocese of Arlington for their tireless efforts on behalf of the unborn.

The group is Christendom’s oldest student-run organization, founded in the first year of the college’s existence in 1977 and is credited with saving the lives of many unborn babies.

“It would be great if we could say this is a huge victory in the fight for the unborn, but even a small win in a long battle can be encouraging,” says vice president for enrollment Tom McFadden. “I’ve been down to this clinic to prayerfully protest so many times, and I am happy to know that, at least for now, there is one less slaughter house in business.”

The entire Christendom College community is encouraged to pray that Planned Parenthood fails in its efforts to relocate following the closure of its 16th Street facility.