Bachelor’s Degree Key to Success According to Industry Leaders 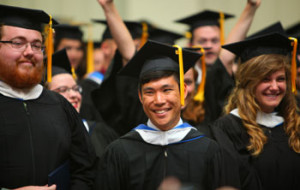 The value of a bachelor’s degree is often downplayed by a society eager for graduates with more commercial, specialized degrees, such as in technology or finance. Such a belief needs to be corrected, however, according to today’s business leaders, as students with a well-rounded background in the humanities, such as from Christendom College, are often more appealing to employers.

In his new book The Career Playbook: Essential Advice for Today’s Aspiring Young Professional, author James Citrin spoke with industry leaders in finance, technology, entertainment, and government to discover why they look to hire liberal arts graduates, despite them not having a specific degree in these fields.

“Some of the more technical roles do require specific technical training, but generally, we look for the willingness and ability to learn fast, a strong work ethic, and cultural fit,” says Clara Shih, founder of Hearsay Social, an enterprise software company.

In other words, technical skills are necessary for these companies, but they need to be built on the soft skills of communication, critical thinking, and leadership that separate the good from the great. Such skills come not from specialized studies that exclude subjects, but instead from a well-rounded education that broadens a student’s mind and prepares him for broadened success.

In the field of finance and equity, liberal arts graduates find success as well, according to Jeff Citrin, co-managing principal of Square Mile Capital, a leading real estate private equity firm. One of his best employees was a philosophy major who worked at a large investment bank following graduation.

“We put our serious candidates though deep case studies to see how their minds work and how they structure problems…[and] this associate [had] incredible poise, the ability to communicate, and solve problems,” says Citrin.

The appeal of a well-rounded graduate, gifted with soft skills from the humanities, is attractive to Jay Walker, founder of Priceline.

“I have often been forced to choose between hiring somebody who is technically trained and somebody who is much more general in their background. I often choose the generalist over the technician,” says Walker.

A liberal arts foundation, such as the one received at Christendom, provides graduates with the abilities to succeed in any field, while also giving them the confidence and initiative to build upon their education with other studies and credentials later. This confidence and drive aided Alec Ross, a 1994 history major, in eventually attaining a top position in the U.S. State Department.

In his role, Ross led teams into over one hundred and fifty countries, and utilized his soft skills to communicate strategies to teams and people from other cultures, in addition to solving problems that would naturally arise in such situations. His degree in the humanities led him to great success in government, causing him to look for other liberal arts graduates to fill out his teams over the years.

When hiring someone for a government position, Ross looked for three qualities in them: intellectual horsepower, curiosity and commitment to lifelong learning, and cultural or linguistic fluency. Graduates with technical degrees might have some of these skills, but not all — it simply is not the nature of their degree.

Graduates of Christendom College leave the school with each of the qualities Ross looks for when hiring. They have the intellectual horsepower to succeed, gifted with the same education received by the saints, scientists, and scholars that have marked the two thousand years of Christendom. With their intellect developed by the classics and by the esteemed faculty, graduates have the ability to master any subject, giving them an intellectual curiosity and confidence that often leads to higher studies later.

By seeking the truth through various disciplines, the students attain an intellectual prowess in which they can take up any career and thrive with competence, grace, versatility, and success.