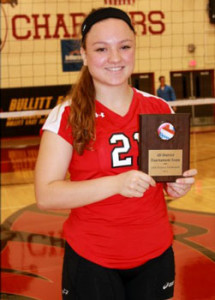 Christendom College’s Lady Crusaders volleyball team will welcome a new face to the team this fall: incoming freshman Johna Fackler, a two-time MVP and three-time team captain of her previous volleyball teams. Fackler, hailing from Mount Washington, Ky., was recruited by Christendom’s athletic department last summer, and plans to continue her love of volleyball and passion for an outstanding Catholic, liberal arts education upon her arrival.

“Originally, [my] Dad looked into top colleges to attend with a Catholic education and he found [Christendom] about the time they saw me. The school basically had everything we were looking for,” says Fackler, in an article for The Pioneer News.

Soon after, Fackler attended Christendom’s Experience Christendom Summer Program to get a better idea of what Christendom had to offer — an experience she described as “amazing,” which encouraged her to apply for admission for the fall of 2015.

Fackler began playing volleyball in the sixth grade, moving through club teams before playing varsity for Bullitt East High School in Mount Washington. There, she made the all-tournament team for her district, playing in the setter position — a position he hopes to continue in when she joins the Lady Crusaders this fall.

While Christendom is hundreds of miles from her friends and family, Fackler chose the college as her next step for its true, Catholic education that she believes will prepare her for success.

“Like most student athletes, I want to go to college to prepare for my career, play the sport I love, make friends and have fun along the way. A Catholic education guided by the Faith offers that and so much more. A college with a true Catholic identity, such as Christendom, will take me beyond the limits of a typical college education and prepare me to experience life in a meaningful way,” says Fackler.

Fackler plans on studying English language and literature while at Christendom, before pursuing a pharmaceutical degree post-graduation in order to launch a career in sports physical therapy. Christendom’s liberal arts education will give her the critical-thinking, communication, and confidence to excel beyond her peers in the field, she believes, giving her a foundation she would not gain otherwise by going straight into a more specialized degree.

Christendom’s Lady Crusaders volleyball team played strong in a victorious season last fall, finishing 8-5 — a record they look to improve upon this fall, with the help of Fackler and other incoming and returning players.