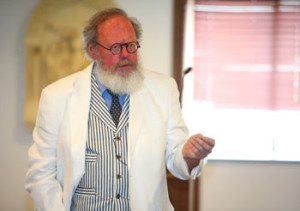 Christendom College founding faculty member Dr. William Marshner spoke on the historical and theological origins of the notion of “transubstantiation” this past week at the Institute of Catholic Culture. Drawing on his vast knowledge of the Church Fathers, Marshner dispelled the idea that transubstantiation only began to be spoken of in the Middle Ages, and explained the falsity of views saying that Christ only implied a symbolic change when he instituted the Eucharist at the Last Supper.

In his lecture titled “From Bread to God: A Catholic Understanding of Transubstantiation,” Marshner began by rejecting the notion that the Catholic Church did not say anything about transubstantiation until the Middle Ages, returning to the words of the Church Fathers to prove his point.

Looking to their vocabulary, Marshner explained how the early Church Fathers believed that Christ’s institution of the Eucharist at the Last Supper was not simply an enhancement or addition to the bread and wine, but was instead a real transformation of them into His Body and Blood.

“The Fathers of the Church, all of them, drew the obvious inference [from the Gospels], namely that the Bread had been changed into the Body of Christ. The Latin Fathers all said so, and they used the verbs ‘mutatio’ and ‘transfiguratio,’ meaning a change. The Greek Fathers used their ordinary words for a change [also]…this is not bread anymore. This cuts down Luther’s view — he thought the substance of the bead stayed there, but now it was enriched. But, that’s not what these words mean,” said Marshner.

He then went further, answering the question of whether this change was a real one or if it was only symbolic — in other words, if it was a change in what it is, or what it means.

Turning to martyrs such as Ignatius of Antioch and Justin Martyr, Marshner revealed the truth: they believed that the bread and wine consecrated in the Mass were the Flesh and Blood of Jesus Christ. This is not a symbolic change, but rather bread and wine that has experienced a real transformation into Christ.

The notion, then, that “transubstantiation” only began to be spoken of in the Middle Ages is cut down by figures who lived within the century after Christ’s death. These martyrs, and other Church Fathers, such as St. John Chrysostom in the fifth century, continued a tradition passed on to them by the apostles, according to Marshner, of what Jesus had done the night before His death.

“None of what I have been telling you is medieval — it all missed the Middle Ages by a thousand years. This is the unchanging and constant tradition of the Church,” said Marshner.

To watch the entirety of Marshner’s lecture please visit instituteofcatholicculture.com.

Marshner will dig into the metaphysical details of transubstantiation in the second part of his “From Bread to God” series, held on Tuesday, June 30, at 7:30 p.m. at St. John the Beloved Church in McLean, Va. Admission is free, and no reservation is required. For more information, please visit instituteofcatholicculture.com. Download the flyer here.