Graduate Students to Help with Renewal of Religious Order 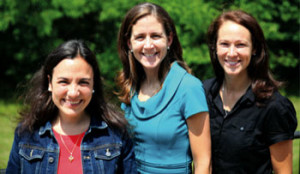 Graduate students of Christendom College are currently working with officials in the Vatican to organize the consecrated women of Regnum Christi as a more autonomous, self-governing entity within the Church — renewing both their personal lives and the religious order in the process. Each of the four women are studying in Christendom’s M.A. program, and call their education instrumental in their ability to work closely with the Vatican on this issue.

“My studies at Christendom, which are concentrated in the theology of consecrated life, have helped me in my personal renewal and in the process of renewal of Regnum Christi,” says Monica Trevino, territorial director of the consecrated women of Regnum Christi in the United States for the past several years.

The four consecrated women studying at Christendom originally come from Mexico and the United States and have been consecrated members of Regnum Christi (RC) for a combined total of sixty years. They are primarily involved in youth ministry, education, and leadership roles within RC and have served in Mexico, Italy, Chile, Canada, Australia, Ireland, and the U.S.

Betty Rivera is the director of Everest Academy Catholic School in Manila, while Angie Hilbun and Andrea Paez both work in campus ministry and youth formation at schools in Texas and Ireland, respectively. All of the women, including Trevino, are enrolled in the M.A. program and are concentrating their studies in the theology of the consecrated life.

Rivera and Trevino participated in the first-ever General Assembly of the Consecrated Women of Regnum Christi last December in Rome, which they described as “a milestone in the renewal process.” A total of 42 consecrated women from all over the world met with the Pontifical Delegate to review and approve the draft of the new statutes for the consecrated women, and to elect a new general government. After a month of prayer, meetings, dialogue, listening and work, the final text of the statutes was presented to the Pontifical Delegate and approved by him.

The RC students are quick to express their appreciation for their Christendom studies.

“I can honestly say that my classes at Christendom and the Vita Consecrata Institute are a gift for me and the Church,” says Hilburn, who has served as resident assistant to the religious and consecrated women attending the VCI for several summers. “The lived ecclesial experience of numerous charisms coming together as a community every summer has been invaluable. I am grateful to God that He has given me this gift of formation.”

The Vita Consecrata Institute is a summer residential program which combines academic courses in spirituality and the theology of the consecrated life with a community life in a retreat-like setting that includes spiritual direction, daily Mass, and common prayer. Many of the students attending are preparing for formation ministries or leadership roles within their orders, and the availability of the faculty for consultation outside of class is a great advantage to them.

“Christendom’s Vita Consecrata Institute performs a valuable service to the Church in assisting these orders and institutes to renew their commitment to the consecrated life,” says Dr. Kristin Burns, dean of the graduate school. “We are honored to be able to assist the consecrated women of Regnum Christi and the other institutes in serving the Church more faithfully.”

This story is taken in part from the spring edition of Instaurare, Christendom College’s quarterly. To read more or subscribe, please visit christendom.edu/news/instaurare-magazine/