Christendom’s Cuddeback Gives Insights into the Year of the Consecrated 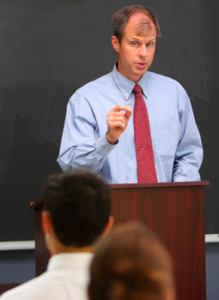 Christendom College’s Dr. John Cuddeback offered a reflection on the Rule of St. Benedict for the Institute of Catholic Culture on June 26, pointing to it as an important work to study during the Year of the Consecrated Life, initiated by Pope Francis last fall.  Cuddeback, chairman of the philosophy department at Christendom, called for the laity to follow the example of the religious in their own daily works, with the Rule of St. Benedict providing the principles for cultivating a strong spiritual life.

Looking to The Rule of St. Benedict, one of the most influential works in the history of Western Civilization, from a purely theological perspective, Cuddeback focused on the main principles of the work — namely obedience, silence, humility, and manual labor — during his reflection, and how they might aid in the pursuit of perfection.

“The main thing we need to learn in the Christian life is how to listen, and [St. Benedict] gives this at the beginning [of the work] as a command. To whom are we being beckoned to listen? To a father…an insight that is at the heart of Christianity and human life. Fathers…have something critical to say. They give precepts,” said Cuddeback.

This command, to listen to fathers, begins the Rule, establishing a key principle of Christianity: the notion of God as Father and authority of all mankind, according to Cuddeback. By learning to listen and subsequently obey the Father, all men can pursue perfection, religious and non-religious — a key theme for the Year of the Consecrated Life.

Cuddeback admitted that some aspects of the Rule are not directly applicable to the non-religious life, as they are specifically for the monastic life, but much of the book can, in fact, be applied to daily life, particularly work.

“Our challenge is to be able to figure out a way to integrate our work into this context [of the spiritual life]. Manual labor is an essential part, and it needs to be done in the spirit of listening to God and what He is calling us to be,” said Cuddeback.

In listening to God, and obeying His commands, every aspect of one’s life can be rooted in the pursuit of perfection, no matter the work that one is called to. Cuddeback pointed to this principle of the Rule as key, and called for all laity to perform daily work within the context of the spiritual life.

“We have to find a way that our work, somehow, is listening to what God is calling us to do,” said Cuddeback.

To watch the entirety of Cuddeback’s lecture please visit instituteofcatholicculture.com.