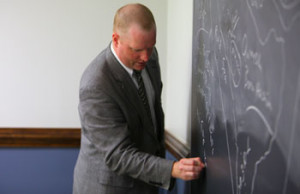 The incoming Christendom Class of 2019 promises to be one of the most exciting, and largest, classes in the college’s history, featuring students of varying backgrounds and locations across the nation. Whether they be valedictorians, scholar-athletes, nationally-recognized gymnasts, film directors, or National Merit scholars, all are drawn to Christendom by a common goal: a passion for its rigorous liberal arts and vibrant Catholic culture.

Christendom’s time-tested liberal arts education in an authentic Catholic culture has attracted students for nearly forty years, with Christopher Tran set to join those ranks this fall. A native of Bellevue, Neb., Tran is active in his Church and community back home, giving his time to help lead the altar servers, sing in the choir, and volunteer at the local homeless shelter and nursing home.

Tran was one of this year’s Padre Pio full-tuition scholarship finalists, and applied for Christendom due to his desire for a proper, Catholic, liberal arts education.

“I am drawn to a liberal arts program to seek…personal freedom, and in the genuinely Catholic education at Christendom, I hope to build a solid intellectual and spiritual foundation for the rest of my life. Christendom fosters growth not only in academics, but in all aspects of personal, communal, and spiritual life, and I look forward to developing skills with which to engage the world,” says Tran.

Laura Cermak, from McLean, Va., shares those same aspirations, evidenced by her valedictory speech at Oakcrest School this past June. One of this year’s two Padre Pio full-tuition scholarship winners, Cermak was very active in her high school years, as a leading member and organizer of her school’s pro-life group, many theatre productions, choir, and as co-captain of the tennis team. She has been a Pure Fashion model and has been involved in youth ministry and civic activities.

Cermak, who plans on majoring in political science and economics, met representatives of many other colleges while discerning where to go for her collegiate career, but believes that no other school can match Christendom’s dedication to teaching excellence.

Hailing from Napa, Ca., Michael LaRochelle is an accomplished gymnast and has been competing since the age of ten, earning trips to the National Junior Olympic Championships the past two years. With this success, LaRochelle is continuing his training in hopes of a shot at the 2020 Olympics in Tokyo — training that will have to come second during his time at Christendom, causing his current gymnast teammates to question why he chose the school.

“Since I am a level ten gymnast, the idea of attending a school without gymnastics seems foreign to my teammates, but I aspire for more,” says LaRochelle who plans on double majoring in philosophy and mathematics.

When he made a visit to the college in 2013, LaRochelle, the third member of his family to attend Christendom, fell in love with the school thanks to the vibrant community life and rigorous classes — classes which will help him attain the critical thinking skills necessary for later success.

“The use of critical thinking developed through the course work is a quality which will be imperative in my future academic endeavors. Not only does critical thinking help that which I intend to do, it is also of fundamental importance to me that I learn how to think critically in a moral environment. I need a college where I can ‘breathe’ Catholic — my aspirations align with Christendom’s in that I, too, desire to restore all things in Christ,” says LaRochelle.