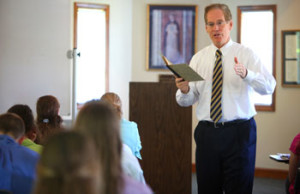 Christendom College was ranked as one of the top five colleges in the nation for its “premier” liberal arts education, according to a recent article in Best College Reviews. Noted for its adherence to John Henry Newman’s Idea of a University, Christendom was placed ahead of such well-known institutions as University of Notre Dame, University of Chicago, Boston College, and Columbia College.

Best College Reviews released their top twenty-five list earlier this week, judging colleges based on their adherence to a classical, liberal education. Ranking Christendom at number five on the list, Best College… lauded Christendom for teaching students concretely according to Newman’s model at each of its four campuses, located in Virginia, Ireland, and Italy.

“Steeped in Catholic tradition and teaching, the Catholic faith is integral in Christendom’s education. The goal of Christendom is to train students in the skills of living the ‘good life,’ as Aristotle would say, especially the life of the mind, useful for any career and all of life.”

“We are consistently ranked as one of the best liberal arts colleges in the nation, and with good reason: since our founding, we’ve engaged students with one of the most challenging, rigorous liberal arts educations in the country. Because of it, every student who comes here has the skills to find success after college. They have the writing skills, the ability to think critically, and a desire to lead that is born out of our education, making them that much more appealing to employers,” says vice president for enrollment Tom McFadden.

Ranked as one of the top ten colleges in the nation by the Intercollegiate Studies Institute (ISI), Christendom appears in numerous other national secular and religious guides each year including Barron’s Best Buys, Peterson’s Competitive Colleges, The Newman Guide to Choosing a Catholic College, and others.

To read more from the article on Best College Reviews, click here.