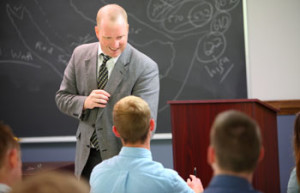 In a recent article, Cecilia Gaposchkin of Dartmouth College gave an in-depth explanation as to what exactly the liberal arts are, why they should be studied, and why studying them makes you smarter than the average college graduate.

She explains the difference between a technical training and an education, explaining that the many pre-professional programs that people study – nursing and accounting, for example – are great for people who want to do just one thing in their lives, but for those who want to be prepared for multiple careers, studying the liberal arts is the answer.

“[L]iberal education, done right and undertaken with enthusiasm, curiosity, and passion, makes you smarter. That’s right. Smarter,” says Gaposchkin. “That is, it hones your natural skills of discernment and intellect to productive thought and the creative application of knowledge. It exposes you to different types of thought (often through distribution and general education requirements) so that you can at once understand the power and the restrictions of different types of thought (that is, different disciplines).

It teaches you how to use your thinking, and the skills acquired (reading, writing, numeracy, analysis, synthesis, the persuasive expression of conclusions, and the creative application of knowledge) in novel and creative ways. That is, it teaches you how to be nimble and creative. It teaches you to distinguish between fact and opinions, and to use facts to pursue informed agendas. These skills are honed first in the context of an area of major study, but the point is that they are basic transferable skills, to be used in any – or many – context(s). This is why, when employers hire students from liberal arts colleges, they care less about the student’s major than about the student’s ability to talk about their major.”

She then gives a brief history of education, detailing the fact that the study of liberal arts is the bedrock of education, and has been since the Middle Ages.

“[O]ne had to learn to think critically, rationally, logically, and creatively before one could undertake more ambitious intellectual work. To that end, the standard university curriculum was rooted in the seven liberal arts (grammar, logic, rhetoric, arithmetic, geometry, music, and astronomy). The seven liberal arts – the precursor of our own conception of ‘the liberal arts education’ – were the building blocks of the competent mind,” she explains.

Moving ahead to modern times, she believes that studying the liberal arts is a key element in learning how to think critically and it gives graduates the edge when looking for employment because their brains have been better exercised during their college careers.

“It is precisely because they are not pigeon-holed into a single vocation and thus a single career path that they have the enviable ability to make and take new professional opportunities,” she says. “Working within a defined discipline, with increasingly large and complex data…the liberal arts student is challenged to manage, assess, and apply increasingly complex ideas and information. Managing and interpreting increasingly complex concepts works the brain, like any muscle, to become stronger and more nimble – that is, smarter.”

Concluding, she advises all parents and soon-to-be college students to remember the purpose of an education and what the ultimate end of a college education is: “It is not vocation training. It is brain-training. We are building the brain trust of the future.”

Christendom College provides a timeless and challenging Catholic liberal arts education. It is the same education that has inspired and produced the greatest scientists, scholars, heroes, and saints over the past 2000 years. Christendom students encounter a universal study of knowledge, unified by the central role played by Philosophy and Theology. By seeking the truth through various disciplines, they cultivate a new intellectual power enabling them to master any subject. This education gives them a perspective on life that few others receive, and that is a view of the big picture, with the ability to stay focused on the Truth, while at the same time, think critically about issues, form opinions, and communicate clearly.  As Blessed John Henry Newman observed, a well-educated liberal arts graduate attains an intellectual prowess in which he can take up any career and thrive with competence, grace, versatility, and success. Unlike the non-liberally trained, the Catholic liberal arts student becomes equipped for a life of leadership and excellence.