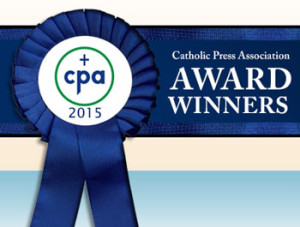 Christendom alumni are receiving high praise and recognition for their writing talents in the world of journalism, with Peter J. Smith (’09) and Ashleigh Buyers (‘12) recently being honored at the 2015 Catholic Press Association (CPA) Awards. Taking top awards for journalism and advertising, Smith and Buyers are the latest in a series of alumni finding great success in journalism, revealing the strong writing and communication skills that a Christendom education provides.

Smith, who earned his B.A. in philosophy, won first place for “Best Front Page — Broadsheet” with other members of the National Catholic Register, along with a third place win in “Best News Writing Originating With the Paper on an International Event” for his story “Syrian and Iraqi Refugee ‘Mega-Crisis’ Is Out of Control.” Smith became a staff reporter for the National Catholic Register in 2013, after writing for LifeSite News for five years.

Buyers’ work as a graphic designer for the Arlington Catholic Herald was also highlighted by the CPA, with her ad “St. Veronica School: Welcome Back” winning first place for “Best Single Ad Originating With the Publication: Black & White Ad.” Her work on the Herald’s annual “Back to School” issue earned her third place in “Best Special Supplement or Special Issue with Advertising Emphasis” as well.

Christendom alumni often find success in the journalism field following graduation, after learning how to write clearly through the many papers assigned to them during their four years at college, along with gaining an education steeped in the greatest minds of Western Civilization, such as Shakespeare, Aquinas, and Aristotle.

Armed with an edge thanks to the communication, leadership, and critical thinking skills gained through their liberal arts education, alumni currently find publication in such news agencies as The Washington Examiner, Breitbart News, The National Catholic Register, Seton Magazine, and Crisis Magazine, among others.

The awards were announced last month at the conclusion of the 2015 Catholic Media Conference held in Buffalo, N.Y. CPA represents more than six hundred organizations in the United States and Canada.

Find out more about how Christendom arms students with the skills for success at christendom.edu.