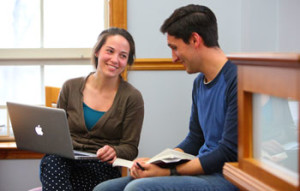 To get ahead in life, and to be successful, more and more evidence is showing that studying liberal arts is the answer. According to a recent article in Forbes, the leaders of Slack Technologies, a software startup led by a philosophy major, credit their liberal arts educated employees for their success, thanks to their abilities to think critically, lead others, and write well — skills that are at the center of a Christendom education.

In the article, written by George Anders, the secret to Slack’s success is revealed: a willingness to put liberal arts majors in top positions for the company, resulting in creative ideas that set them apart from others. Slack, whose main product is an innovative team-messaging app, is at the forefront of many tech companies imparting the same practice, who see people who can connect well with customers as key to the future.

Stewart Butterfield, who is the co-founder and CEO of Slack, earned his undergraduate and master’s degrees in philosophy, the former from Cambridge — degrees he sees as crucial to his company’s success.

“Studying philosophy taught me two things: I learned how to write really clearly. I learned how to follow an argument all the way down, which is invaluable in running meetings. And when I studied the history of science, I learned about the ways that everyone believes something is true–like the old notion of some kind of ether in the air propagating gravitational forces — until they realized that it wasn’t true,” said Butterfield.

In a growing industry, future employment will not be found in narrowly defined tech jobs, according to Anders — instead, they will be found in marketing, sales, and communication positions, something that many policy-makers in the government fail to grasp.

“[B]y 2022 some 1 million more Americans will enter the workforce as educators. Another 1.1 million newcomers will earn a living in sales. Such opportunities won’t be confined to remedial teaching or department store cashiers. Each wave of tech will create fresh demand for high-paid trainers, coaches, workshop leaders and salespeople. By contrast, software engineers’ ranks will grow by 279,500, or barely 3% of overall job growth. Narrowly defined tech jobs, by themselves, aren’t going to be the answer for long-term employment growth,” says Anders.

As tech companies’ sales continue to grow, these companies are looking to hire graduates with communication skills and creativity who can make their products more personable and relate better with customers.

While engineering jobs disappear as more services become automated, according to Anders, public relations specialists, communication officers, and sales and marketing teams are being hired more and more because they offer skills that cannot be automated. Larry Quinlan, the chief information officer for Deloitte Consulting, LLC, is in favor of “STEAM” being taught in schools, in which the “A” stands for the arts.

“It’s not enough to be technologically brilliant,” Quinlan says. “We need senior people who understand business processes, too.”

The job market is eager to hire graduates with liberal arts degrees, whether they be philosophy or English literature, because these degrees guarantee the interpersonal skills that companies are looking for in their employees.

Christendom College provides the timeless and challenging Catholic liberal arts education that graduates need for success, both in the workplace and outside of it — the same education that has inspired and produced the greatest scientists, scholars, heroes, and saints over the past 2000 years. Christendom students encounter a universal study of knowledge, unified by the central role played by philosophy and theology. By seeking the truth through various disciplines, they cultivate a new intellectual power enabling them to master any subject. This education gives them a perspective on life that few others receive, and that is a view of the big picture, with the ability to stay focused on the Truth, while at the same time, think critically about issues, form opinions, and communicate clearly.