Benefactors Inspired by the Mission of Christendom 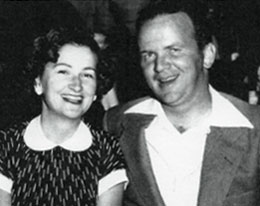 The generous benefactors of Christendom College have helped it fulfill its mission without the need for federal funding over the years, allowing Christendom to remain free from the progressive agendas that have swept through the government and much of the nation. Frank and Clare Lynch, natives of San Francisco, saw Christendom and its mission as a beacon of hope in an increasingly secularized world, and began giving to the college in the 1980s — a generosity that would continue for the next thirty years.

In San Francisco, the Lynches lived simple lives in the city: Frank was an ex-cop turned taxi driver, while Clare was a high-level clerk for the city. Despite not making much money, they insisted on donating to organizations that still promoted the traditional, conservative, Catholic values  they hoped could one day save their hometown. Out of many other conservative institutions of higher education in America, Frank and Clare chose Christendom as an organization worthy of their donation.

After reading about the college in the Catholic newspaper The Wanderer, Frank and Clare were drawn strongly to the mission of Christendom, which was founded in response  to the very cultural revolution that had transformed their home of San Francisco in the 1960s. With the little money they had, Frank and Clare began to donate to Christendom in 1985 and continued to do so for the next sixteen years, before Frank passed away in 2002.

When Clare died in August of 2014, the executor of Clare and Frank’s estate, Charles Holbrecht, was shocked to discover that the Lynches had amassed a large amount over the years — 1.1 million of which they bequeathed  to Christendom College in their will. This incredible showing of generosity revealed the belief of one family that Christendom’s unwavering stance for traditional values in America was worth preserving into the future.

The Lynches are not alone in this belief. By rejecting federal funding, Christendom’s ability to continue in its mission hinges on the generous support of donors, who have helped the college continue to properly educate students since its founding.

The traditional, liberal arts education that forms the backbone of Christendom can help bring change, not only to the Lynches’ San Francisco, but to the rest of the world as well. By investing in the students of the college, donors can be assured that their gifts will bring hope for a brighter future.

For more information on leaving an estate gift to Christendom, please contact Glen McLeod of the Christendom College Office of Advancement at 800.877.5446 ext. 1602, or at glen.mcleod@christendom.edu.

This story is taken in part from the summer edition of Instaurare, Christendom College’s quarterly magazine. To read more or subscribe, please visit christendom.edu/news/instaurare-magazine/