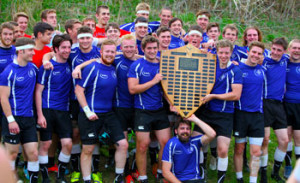 The excitement and suspense of Christendom rugby is a hallmark of every spring semester at the college, as men from each class join together to grow in camaraderie, virtue, and discipline both on the pitch and outside of it. For senior and co-captain Patrick Audino, Christendom rugby hit a highpoint this past spring with the team’s incredible 7-2 record — a season defined by the crushing defeat of Franciscan University of Steubenville in the annual Shield Rugby Match.

Here is his story:

“We had one mission in mind coming into the season: retrieve the Shield Trophy from Franciscan University of Steubenville. After playing well last season, but coming up short in the first annual shield rugby match, Christendom’s rugby team traveled to Steubenville, Ohio, in April to find redemption, playing the NCAA Division III Barons on their home turf. As team captain, I was impressed with the way our team composed itself for the game, especially considering the long trip and the almost overwhelming amount of hype coming into the game.

We were on a four-game winning streak, and brought a younger, faster team to take on Franciscan than we had last year. Still, we had one lingering question: could this team not only play well, but also take back a trophy for the entire Christendom community? That question was answered resoundingly, with a crushing 57-11 victory over Franciscan University. There is nothing quite like lifting that Shield after the game, making all the winter practices finally worth it.

Several people have asked me the same question over the past few months: what made the Christendom rugby team so successful this year? We finished the season with an incredible 7-2 record, playing tough teams and consistently rising to the challenge. But, what was it that made us one of the best rugby teams in the college’s history?

I took some time to reflect on this question, and I quickly realized that it wasn’t that we had a more athletic team than in past years, or that we suddenly had individual talent that set us apart. In fact, in my three years playing at Christendom I think that the opposite could be true. What made this year’s team so special then? The commitment every person had to the team.

We had a record number of players this year, with over forty students joining the varsity squad — many playing rugby for the first time. The unsung heroes of the team are those very players, the freshmen and sophomores who came out to practice every day, despite knowing that their time on varsity was limited. And yet, they consistently came out, because of their commitment to Christendom rugby. I could not have asked for a better group of guys to lead this spring.

The shield match defined our season, but it was not the entire story. Our hard work practicing in the snow this past winter paid off in the very first game, with an amazing comeback win against Mount Saint Mary’s University on our home field, winning 39-27 in front of hundreds of fans. We were down fourteen points in the second half and still managed to come back to win by twelve, making it one of our season’s greatest accomplishments. Mount Saint Mary’s went on to play in the national championship title game later in the spring, and we defeated them — something that speaks wonders to what Christendom rugby could become in the near future. 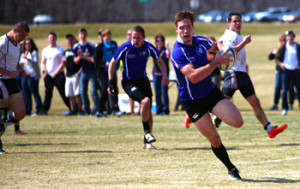 That win gave the team confidence going forward, with our hard work paying off again in a tangible way at the Jeff Hewitt Memorial Cup tournament in Pittsburgh. In three games, we scored 128 unanswered points and swept the competition, bringing home another trophy for Crusader Gymnasium. By the end of it all, we finished the year 7-2 — a testament to the commitment of every single player on the team, and to the strength of Christendom rugby.

I have been blessed with the opportunity to continue playing rugby here at Christendom, after playing the sport at St. Gregory’s Academy in high school. After winning a state championship in high school and excelling in my classes, I applied for, and was awarded, the Thomas S. Vander Woude scholarship at Christendom. By coming here, I’ve learned a lot more about rugby, but even more about the important off-the-field aspects. I have grown as a leader, and as a man, through my seven years of playing rugby.

I am honored to have captained this team for the past two years now, and it has taught me more about myself than I ever could have imagined. There is something about the sport of rugby, especially here at Christendom, which draws men to test themselves, not only physically, but also mentally.

It gives these men a ‘band of brothers’ to help them in all aspects of their life. Our weekly team Mass, team study hall, and the simple disciplines that we upheld throughout the season helped us to succeed on and off the pitch.

The story of our season is that hard work pays off. I’m excited for the future of Christendom rugby, as our support grows, and the chance at competing for a national championship continues to become a greater possibility.”

This story is taken from the summer edition of Instaurare, Christendom College’s quarterly magazine. To read more or subscribe, please visit christendom.edu/news/instaurare-magazine/