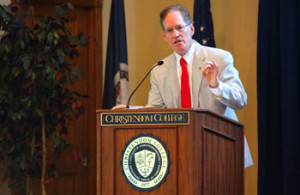 Christendom College began its 2015-16 academic year with a record enrollment, including a record number of newly admitted students to the college. College president Dr. Timothy O’Donnell made the announcement on August 23, during his opening of the academic year address to the student body, where he called on the record 470 students to “dare to be great.”

“None of us are here on August 23, 2015, by accident. Each and every one of you in this room is called to be great — each and every one without exception,” said O’Donnell. “The table is set — we know we’re on the winning side. If we can come together this year, if we can support one another with faith, hope, and charity, and give that encouragement, and truly dare to be great, and strive for excellence, I can promise you that we are going to have a great year together.”

The student body of 470 includes 173 new students—a group that includes transfers, re-admitted students, and first-time freshmen. By bringing in a record number of students, and increasing retention rates, the admissions office exceeded its goal by 3%, setting a record enrollment for Christendom, and registering a 9% growth over the previous year. 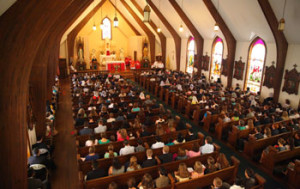 “People want to be here at Christendom, to study, to live, to truly become great,” says admissions director Sam Phillips. “All of our students are responding to God’s call to be the great man or woman for which He created them and Christendom is going to give them the education and formation needed to achieve their dreams.”

This year’s freshman class of 149 students hail from thirty-three U.S. states, along with Canada, Belgium, and Korea.  Additionally, 58% of the incoming class are alumni of the college’s popular Experience Christendom Summer Program, while 38% are siblings of former or current students.  Of special note, there are four sets of twins in the freshman class as well – another historic first for the college.

“Christendom’s enrollment has grown 22% since the fall of 2012 – a real testament to the outstanding education that we offer and the hard work of the admissions office team. Most colleges today are seeing a steep decrease in enrollment, so we are very encouraged by our unique position of growth and look forward to giving our students the best education possible,” says vice president for enrollment Tom McFadden.

With the student body increasing in size, the college continues to increase in campus size as well. The new Madonna Hall faculty office building was completed this summer, offering expanded office space for the faculty, along with a new location for students to meet with them and grow in their education. A new admissions office suite, overlooking the Shenandoah River, is nearing completion as well.

In an effort to meet the ever growing demand for Christendom’s Catholic liberal arts education, it was recently announced that a new dormitory will be built this year, ready for occupancy next fall. Groundbreaking on the St. Clare’s Hall will take place later this fall.

The news, announced by O’Donnell, comes in addition to the variety of exciting events coming to Christendom this year, including famed intellectuals George Weigel and Pam Stenzel for the college’s Major Speaker series in the fall; a new lineup of alumni speakers for the “Life on Tap” series; and Edwin Cardinal O’Brien and Dr. James Hitchcock coming to speak at this year’s graduation ceremonies.

Over the summer, a number of administrative changes were made, bringing new talent to the administrative team.  Alumni Joseph Walsh (’15) and Patrick Quest (’08) joined the college staff as men’s residence director and athletic director respectively, while alumna Kelsey Gordon (’15) is the new assistance director of student activities.  The college also added five new visiting lecturers in the departments of theology, political science, classics and mathematics.