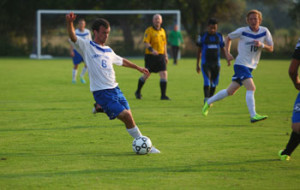 The Christendom Crusaders kicked off their season in a dominating fashion on Tuesday, September 1, playing in front of a packed crowd on Crusader Fields. Coming off an impressive 2014 season, the Crusaders crushed crosstown rival Lord Fairfax Community College on opening day, defeating the Lions 11-2.

The Crusaders wasted no time putting points up on the new Crusader scoreboard, scoring two goals in the first ten minutes of the game. After a hard-played half, the Crusaders revealed the value of the intense conditioning they undertook before the start of the season, outlasting the Lions and taking a dominant lead of 6-0.

During the second half, the Crusaders racked even more points up on the board, scoring an additional five goals before the ninety minutes of game-time were done. Last year’s two leading goal scorers, sophomores James Salmon and James Miller, did not disappoint in their return to the pitch, with Miller scoring a hat-trick and Salmon putting two goals into the net. Stephen Foeckler played hard as well, shooting two goals, while freshman Peter Day scored two goals and senior Sean Salmon finished with one goal as well. Sophomore keeper Richard Blank played an amazing game on defense, with thirteen saves.

The next men’s soccer game is September 4 at Crusader Fields, as the Crusaders take on Berkeley New-Jersey. Find out more information at christendomathletics.com.