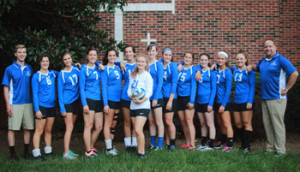 The Lady Crusaders volleyball team returned to the court this past week, gaining their first win of the season in a Tri-Match as they look to continue their string of victorious seasons.

Playing their season opener against Mid-Atlantic Christian University (MACU), the Lady Crusaders played strong in their set of matches against MACU in three tight and intense games. Their conditioning and practice under returning volleyball coach Joshua Petersen paid off, as the Lady Crusaders pulled off an impressive 3-0 win to begin their year.

Coming in with a young team dominated with eight freshmen on a twelve-person roster, the strength shown in the opening games bodes well for the future of Christendom’s volleyball program. Last year, the Lady Crusaders finished their season victorious with a 7-5 record, capping it off with a three-game winning streak.

Christendom looks to keep that winning streak alive as they hit the road again this weekend to play the University of Valley Forge, in anticipation of their home opener on September 9. Find out more information at christendomathletics.com.