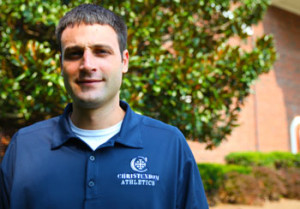 Christendom College recently announced the hiring of Patrick Quest as its new athletic director. A former athletic director for St. John Academy in McLean, Va., Quest is now in charge of directing all of Christendom’s intercollegiate and club sports teams and athletic events.

Quest, a member of Christendom’s class of 2008, returns to the college after earning a Master’s degree in sports management last December and having years of experience working at various schools as either athletic director or coach.

“It is great to welcome Patrick Quest back to Christendom. The experience and enthusiasm that Patrick brings to the position will be a huge positive for both the student-athletes and the entire campus community,” says dean of student life Chris Vander Woude, who also served as athletic director at the college for seven years.

“He is a man of exceptional character and dedication, committed to the pursuit of excellence. I believe he will be able to foster greatness by continuing to build our athletic program and by serving the students of Christendom,” says Vander Woude.

Quest, a native of Nevada, Mo., had a love of sports from a young age, carrying that with him through high school and into his Christendom career. While at Christendom, Quest dominated on the basketball court and in the annual East-West and Upper-Under football games, showing a talent and discipline that earned the respect of his peers and the Christendom community.

His love of the game and dedication to the Christendom community, shown during his time serving in the athletic department and with Shield of Roses, were rewarded the spring of his senior year, when he was awarded the inaugural “Pate Quest Award” for outstanding leadership by a scholar-athlete — an award that has continued on at Christendom ever since.

After earning his B.A. in history from Christendom in 2008, Quest joined St. John Academy as athletic director in 2009 — a position he held for the next six years, growing and impacting various programs during his time. He also coached basketball for St. John and Bishop O’Connell high school, as well as coaching basketball camps for UCLA, Stanford University, and Santa Clara University during the summer since 2008.

Quest replaces Josh Petersen who will continue on at the school as head women’s volleyball coach.

“I would like to thank Josh Petersen for his generous service and personal commitment, especially last year as he served as the athletic director. Josh was instrumental in the updates to the weight and fitness rooms as well as the new outdoor scoreboard,” says Vander Woude.