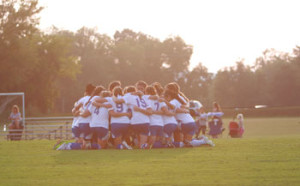 All three of Christendom’s fall sports teams came up victorious over a busy Labor Day weekend, with the men’s soccer team scoring two wins at home and on the road, while the Lady Crusaders soccer and volleyball teams dominated in away games.

The men’s soccer team followed up on their high-scoring season opener with a strong defensive game on Friday, September 4, defeating Berkeley New Jersey 2-0. James Miller scored early on, giving Christendom a 1-0 lead for most of the game. The match grew intense in the second half, with the Crusaders playing a strong defensive game, led by Jeremy Minick and Nicholas Santschi.

After a poorly taken free kick by Berkeley NJ, the ball fell to Sean Salmon. After passing the ball up the field to Peter Day, he beat his defender and the goalie to score in the last five minutes of the game, putting up his third goal of the season and ensuring Crusader victory.

After two straight wins at home to start their season, the Crusaders continued their dominance on the road, routing Central State Penn 8-1 on Monday, September 7. James Salmon continued his high-scoring dominance, scoring early and often for the Crusaders, resulting in his first hat trick of the season.

James Miller scored another two goals over the course of the game, raising his goals scored total to six for the season so far, in only three games. Stephen Foeckler and Patrick Audino both put up goals of their own, with Michael Duca closing the game with a breakaway goal. On the defensive side, Richard Blank continued his hot streak in the net, giving up only his third goal of the season so far.

On the women’s side, the Lady Crusaders soccer team continued their winning streak on the road on Saturday, September 5, defeating Sweet Briar College 3-0.

After coming up empty the past two years against Sweet Briar, the Lady Crusaders entered the match determined for victory. After a tough first few minutes, Bryn Burgess scored the first goal of the game, giving the Lady Crusaders a confidence that lasted throughout the ninety minute match.

Mary Grace Handy finished off the win by adding two more goals to the score, and goalkeeper Madeline Hill proved impenetrable for the second game in a row, giving the Lady Crusaders another shutout.

The Lady Crusaders volleyball team spent their second weekend on the road this past Saturday, September 5, traveling out to Pennsylvania for a match against the Valley Forge Patriots. After taking their season opener last weekend, the Lady Crusaders came back in spectacular fashion against the Patriots, winning the match 3-2.

The match was intense from the beginning, with the first game ending in a tight win for the Lady Crusaders, 28-26. Not ready to be beaten, the Patriots fought back hard and were able to claim both the second and third game by 25-22 and 25-20, respectively.

Down 2-1 with the match on the line, the Lady Crusaders returned, ready to take back the court. They never trailed again after that, taking the fourth and fifth games, 25-20, and 15-11, resulting in a 3-2 match win.