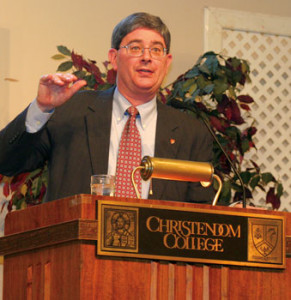 Acclaimed author and theologian George Weigel will deliver a lecture titled “Evangelical Catholicism and Catholic Higher Education” to the Christendom community on Monday, September 14, the anniversary of the founding of Christendom College. Launching the college’s Major Speakers Program for the academic year, the talk will begin at 7:15 pm in St. Lawrence Commons.

Weigel, who asserts that Christendom College is one of the best liberal arts colleges in America, is a Distinguished Senior Fellow of the Ethics and Public Policy Center, the founding president of the James Madison Foundation, and one of America’s leading public intellectuals. Born in Baltimore, Maryland, Weigel received his education from St. Mary’s Seminary and University, and later, his master’s degree from St. Michael’s College, University of Toronto.

Weigel is the author of over twenty books, including Letters to a Young Catholic, The Cube and the Cathedral: Europe, America, and Politics Without God, Witness to Hope: The Biography of Pope John Paul II, The End and the Beginning, and his most recent work, Evangelical Catholicism: Deep Reform in the 21st-Century Catholic Church. His scholarly works and reputation have earned him eighteen honorary doctorate degrees, as well as the papal cross Pro Ecclesia et Pontifice and the Gloria Artis Gold Medal from the Polish Ministry of Culture.

A frequent guest on television and radio, including serving as the Vatican analyst for NBC News, Weigel’s weekly column, “The Catholic Difference,” is syndicated to sixty newspapers around the United States. His scholarly work and his journalism are regularly translated into the major European languages. He is a longtime friend of the college and serves on its advisory board.

Christendom College’s Major Speaker Program is an important aspect of the academic life at the College, offering the students and community an opportunity for cultural, intellectual, and spiritual enrichment beyond the classroom. The program offers students the opportunity to gain greater insights and depth of understanding of important issues, and to interact personally with a wide range of men and women who are shapers and critics of our society.