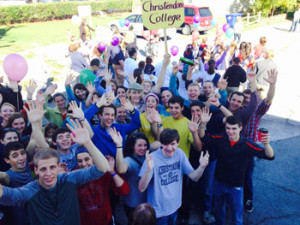 While students across the nation readjust to classes and homework, one college campus is preparing to take their education and enthusiasm out into the community for the sake of life itself. On October 3, the students of Christendom College will support the pro-life cause at the Front Royal Pregnancy Center’s annual Walk for Life, not only by walking in the event but by raising thousands of dollars for the center as well.

The students, faculty, and staff of Christendom are known for their pro-life stance nationally, having participated in the March for Life every year since its founding, but this fall they are using the force of their record enrollment to help those in need within their local community.

Sophomore Maria McFadden is helping coordinate the Front Royal Pregnancy Center’s annual Walk for Life this October, a walk which will take place right down the street from Christendom.  Though recruiting for the Walk could be difficult in addition to handling a full course load, she knows that convincing her fellow students to participate is the easy part.

Last year, the student body embraced the opportunity to raise as much money as possible for the local Walk for Life, with class presidents holding competitions to see which group could bring in the most dollars; staff and faculty of the college also joined in the initiative and raised large amounts of money themselves.  As a whole, the student body raised over $7000, making them the most generous donor group out of all those participating.  McFadden has high hopes that that her peers will do so again:

“We are mobilizing team captains for the classes, encouraging people who then go encourage their friends. Christendom’s motto is to make a difference: this is a way to actually do it.”

Students of Christendom have been involved with the Front Royal Pregnancy Center since its beginning.  In 1991, alumni Nancy Briggs (’82), Maggie Ciskanik (’84), Hannah Jurkowski (’86), Tom (’84) and Tina (’83) Furtado, as well as Frank (’83) and Angelique (’83) O’Reilly came together to become the center’s founding board members.  Since then, various local volunteers and many Christendom students—both current and graduated—have worked through the center to provide supplies and care to pregnant women in need.

Following the example of their alma mater, the founding board decided to run the center strictly on donations so that they could also decline federal funding, thus only paying for the things that they believed were not only important, but also morally permissible.  The center continues to run in the same way, making the funds raised through the annual Walk for Life an integral part of supporting the local pro-life presence.

Though the rest of the nation may still be recovering from the shocking videos exposing Planned Parenthood, the passionate pro-life youth of today are taking advantage of the much-needed attention to mobilize more people for the cause.  Christendom’s students have a knack for rising to the occasion, and this opportunity to make a powerful political statement through serving the women of the local community is one the pregnancy center can be certain the students will not be ignoring any time soon.