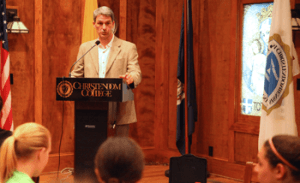 Former Va. Attorney General and gubernatorial candidate Ken Cuccinelli encouraged the youth of Christendom College to get involved in politics during a talk in St. Kilian’s Café on September 8. Speaking to a crowd of close to a hundred students, faculty, staff and guests, Cuccinelli related how much success young people can find in political campaigns, and how they can be witnesses to the truth in the process.

Sponsored by the College Republicans club, Cuccinelli’s talk focused on the need for strong, faithful conservatives in political campaigns today. This is not a role restricted to older people, Cuccinelli explained, but is instead one in which the youth can thrive as well.

“There’s this concept of changing hearts and minds in politics; you can’t do that in television ads. You do that by talking to people one-on-one — there’s no substitute for live, human interaction…that’s how you change people’s minds, not just for one race, but for their entire course in politics,” said Cuccinelli, who also spoke to the Christendom community in 2012 as part of the college’s Major Speakers Program. “Young people especially can play a role in that and, frankly, have for many years.”

Turning to his own long career in politics, Cuccinelli related how young students have helped his campaigns over the years. In 2003, as he was running for state senate re-election, two of Cuccinelli’s top precinct captains were teenagers — one, a public-schooler, and the other a fifteen-year old home-schooler.

While they were too young to vote, they were “worth a hundred votes each, without casting a ballot,” revealing the enormous impact that enthusiasm and idealism can have in political campaigns. For many of Cuccinelli’s later elections, his own campaign manager helped while she was still in college, managing over 350 people on a budget of over a million dollars — a testament to what college students can accomplish before even graduating.

“There’s nowhere else where someone your age can get this kind of responsibility this fast,” said Cuccinelli.

“Your lives are as un-busy as they ever will be for many years into the future. Right now, you have the time, and everyone here has more than enough energy and commitment to undertake these kind of roles in political campaigns — I know enough about Christendom to know that — whether its managing a local campaign, or whether its managing a county for a bigger operation like a presidential campaign,” said Cuccinelli.

Cuccinelli concluded his talk by focusing on the importance of being witnesses to the truths of the Catholic faith in the public sphere. This is an obligation that all Catholics have, especially in regards to politics, according to Cuccinelli. No matter the issue or the political pressure, every person has the obligation to stand up for the truth — something that Christendom students and alumni are uniquely prepared to do.

“I have a very faith-based notion of our obligation [in politics]. I believe we are obligated to fight, but not to win. That is not our province. God has a plan, and your job is to pursue His Will,” said Cuccinelli.

To listen to this talk in its entirety, please click below.