Christendom College President to Speak at World Meeting of Families 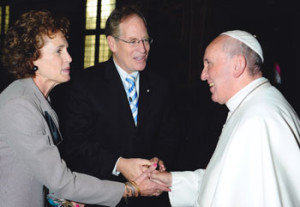 Christendom College president Dr. Timothy O’Donnell will join other prominent speakers and theologians at this year’s World Meeting of Families, held later this month in Philadelphia from September 22-27. A consultor to the Holy See’s Pontifical Council for the Family, who are also sponsoring the event, O’Donnell will speak in a breakout session on Wednesday and chair another session on Thursday, in anticipation of Pope Francis’ arrival in Philadelphia on September 26-27.

When he arrives in Philadelphia, O’Donnell will speak in a breakout session titled “Rebuild My Church and Start from the Foundation: Living as ‘Domestic Church’” on Wednesday, September 23. His talk will be touching upon the theme of this year’s World Meeting of Families: “Love is the Mission: The Family Fully Alive.”

On Thursday, September 24, O’Donnell will chair another breakout session titled “Ahead of Its Time: The Prophetic Character of Humanae Vitae,” where he will moderate the talk, featuring Dr. Janet Smith, and participate in a closing question and answer session as well.

O’Donnell was appointed to the Pontifical Council for the Family in 2002 by Pope St. John Paul II —an appointment that was renewed in 2009 by Pope Emeritus Benedict XVI, and in 2014 by Pope Francis. As a consultor, O’Donnell has delivered addresses during plenary assemblies of the Pontifical Council and has been charged with drafting reports for the Vatican on the state of the family based on the insights of the English speaking countries.

While in Philadelphia, O’Donnell, who is also a member of Legatus, will be giving radio interviews to Revenant Radio and Vatican Radio, and will appear on EWTN television as well to speak about the World Meeting of Families, his talks, and Pope Francis’ first papal visit to the United States.

This year’s event, which includes a four-day “congress” and a Papal Mass on Sunday is expected to draw close to two million attendees from 150 nations.