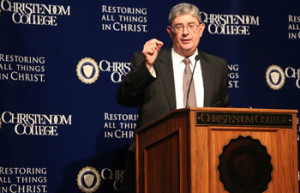 “The Catholic college and university of the 21st century and the third millennium exists to equip disciples for mission. It exists to deepen the human and intellectual formation of witnesses to Christ. As Pope Benedict XVI said…in 2008, ’facilitating personal witness, personal friendship with Jesus Christ in communal witness to His loving Truth is indispensable to Catholic institutions of higher learning,” said Weigel.

Weigel, who asserts that Christendom College is one of the best liberal arts colleges in the United States, began his lecture by looking over Catholic history of the past sixty years.

Pointing specifically to the pontificate of Pope Saint John Paul II, Weigel explained that his strategic vision, both during the Second Vatican Council and his own pontificate, was to re-propose Jesus Christ as the answer to the question that is every human life. Weigel asserted that this was a turning point for Catholicism, leading to a new era that “is first and foremost dedicated to the proclamation of the Gospel, an era that John Paul II came to call the New Evangelization.”

Weigel explained that Catholics are now living in one of the most dramatic moments in Church history. Begun by Pope Leo XIII with the creation of modern Catholic social doctrine in the papal encyclical Rerum Novarum and continued by Pope Saint John XXIII with the Second Vatican Council, the New Evangelization exists, according to Weigel, so that Catholics can experience a new Pentecost, and thus go out to convert the world.

“I, and others, have come to call this ‘Evangelical Catholicism.’ It’s a Catholicism of radical discipleship, in which we are to understand that our Catholic faith is not one facet of our identity, but that from which everything else about us flows…this new vision of being the Church of the New Evangelization places far greater demands on all of us. It will be a Church of lifelong learning [and] lifelong catechesis,” said Weigel.

The Church’s status as one of lifelong learning puts greater demands on the Catholic college and university as well, continued Weigel. In the Church’s mission to convert the world to Christ, students must be equipped with the tools to be missionaries in their own homes, their schools, and beyond.

“The ambient public culture is not supportive of the transmission of the faith. It’s not neutral about the faith — it’s actively hostile to it,” said Weigel. “In addition to equipping witnesses to Christ for the evangelical mission into which all of you were baptized, the Catholic college and university of the 21st century and the third millennium must also, as John Paul II insisted, be a rescuer of Western Civilization,” said Weigel.

In conclusion, Weigel praised Christendom for being an expression of what Pope Saint John Paul II used to call the “symphony of truth.”

“It’s not that you just learn things here — you learn how to put things together,” said Weigel. “Much of American higher education is not harmony — it’s cacophony, because there’s no directing principle out of which things are put together. That is what this college will do for you and for the students who come after you: it will get you to see the mosaic that forms out of these different, beautiful pieces of glass. It will get you to see how it fits together, so that you can be witnesses to Christ, renewers of the civilization of the West, and rescuers of democracy. What you do here, in this little corner of the upper Shenandoah, and how well you do it are matters of urgency far beyond this lovely part of the world. What you do here can be, should be, and in some sense must be, world transforming.”

George Weigel, a Distinguished Senior Fellow of the Ethics and Public Policy Center, is also the founding president of the James Madison Foundation. The author of Witness to Hope: The Biography of Pope John Paul II, Weigel has been awarded eighteen honorary doctorate degrees and is the Vatican analyst for NBC News. He is a longtime friend of the college and serves on its advisory board.

This lecture was part of the college’s Major Speaker’s Program, an important aspect of the academic life at the college that offers the students and community an opportunity for cultural, intellectual, and spiritual enrichment beyond the classroom. Through the program, students are able to gain greater insights and depth of understanding of important issues, and to interact personally with a wide range of men and women who are shapers and critics of our society.

Listen or download this inspiring lecture at Christendom on iTunes U.