Crusader Soccer Teams Continue Domination at Home and Away 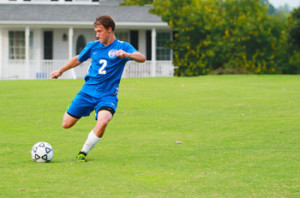 The Christendom Crusaders and Lady Crusaders refuse to lose this year while on the soccer field. This past weekend, both teams racked up even more victories, both at home and on the road.

Playing in front of a packed crowd on Friday, September 18, the Crusaders soccer team quickly jumped on the board against Appalachian Bible College in the first half, thanks to goals from James Miller and James Salmon, two of the team’s leading scorers. Salmon ended the game with three goals, giving him his third hat trick of the year.
The Crusaders continued their domination in the second half, with Peter Blank and Peter Day both scoring on Appalachian, leading to a final score of 6-2.

The Crusaders’ defensive line refused to budge against Appalachian over the course of ninety minutes, with goalkeeper Richard Blank continuing his authority in the net this season. The victory raises the Crusaders’ regular season record to 6-0-1. 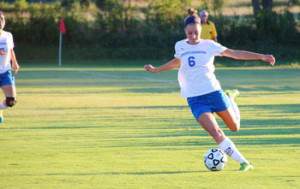 The Lady Crusaders went on the road on Saturday, September 19, taking on the Valley Forge Patriots. Opening with a strong first half, the Lady Crusaders quickly dominated the field, earning goals from Bryn Burgess, Mary Grace Handy, and Anne Nelson. This three-goal cushion allowed the Lady Crusaders to continue to control the rest of the half.

In the second half, Bryn Burgess contributed three more goals to the tally with assists from Anne Nelson and Emily Weichert. Nelson netted another goal in the fifty-fifth minute with an assist from Veronica Wilson. Mary Grace Handy scored the final goal of the game with an assist from Anne Nelson, completing the shutout 8-0. The Lady Crusaders combined for forty-two shots total, including twenty-four that were on goal.

Christendom’s defensive line remained solid throughout the afternoon, allowing only four shots on goal, all saved by goalkeeper Madeline Hill. The Lady Crusaders have yet to give up a single goal while on the road this year, raising their regular season record to 3-0-1.