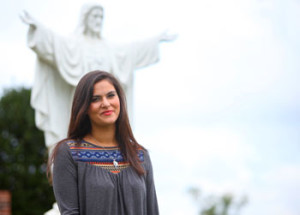 When hundreds of thousands arrive in Philadelphia this weekend for Pope Francis’ visit, they will see one of Christendom’s own performing on stage: alumna Marie Miller. Miller is one of the main performers at the Festival of Families on Saturday, September 26.

When she hits the stage, Miller will join actor Mark Wahlberg, comedian Jim Gaffigan, and musical acts Aretha Franklin, Andrea Bocelli, and the Fray. Her biggest guest will be joining her on stage as well, Pope Francis, with an estimated crowd of over 750,000 at the festival.  She will perform two of her biggest original hit songs, You’re Not Alone, and 6’2.

Since leaving Christendom College, Miller has played in nearly all fifty states and had her songs aired on Christian and secular pop radio stations. Her performance in Philadelphia will be her biggest show ever, an opportunity that she believes her Christendom education helped her obtain.

“Having that liberal arts education at Christendom was so important for me in developing my mind and heart, through the amazing time at Mass and through all the classes,” says Miller, who has four siblings currently attending Christendom this year.

She continues to carry her love of education on the road with her, reading many of the books in Christendom’s curriculum while traveling from city to city.

“I learned so much. I love to read, so reading the great books, especially in Mrs. Hickson’s class, has helped my life so much. The human nature course in philosophy was incredibly influential to me as well — you don’t know what to do and where to go if you don’t know who you are. Understanding who I am was very important for me, so gaining that Greek tradition going forward has had a huge impact on my career,” says Miller.

The Catholicism Miller grew up in, both at home and at Christendom, continues to shape her life and career, driving her to evangelize to others through her songs and example. While the music industry is full of “bad art,” she believes that it is important to live out her vocation and help bring good art back into the world.

“The reason why I’m doing music is because I think of it as a vocation. I remember reading John Paul II’s Letter to Artists at a young age, and he says that ‘beauty is a call to transcendence that stirs in us the hidden nostalgia for God.’ Even if I’m playing at a regular, secular music venue, the goal in mind is…to bring people closer to God. There’s a lot of bad art out there, so I believe it’s important that good people are in art to influence it for the better,” says Miller.

Miller can be seen live in Philadelphia and on television on Saturday, September 26 at 7:30 pm. For more information, please click here.