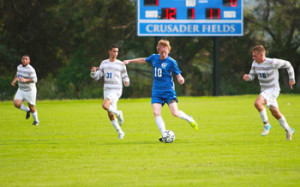 The men’s team has lit up the scoreboard so far this season, scoring a combined forty-seven goals in eight games — averaging an incredible 5.9 goals per game. Despite taking their first loss to Potomac State College of WVU this past Saturday, the men’s soccer team has remained undefeated at home so far this season, leading to a 6-1-1 record overall — a testament to the strong offensive and defensive lines, led by head coach Jake Guttierrez. 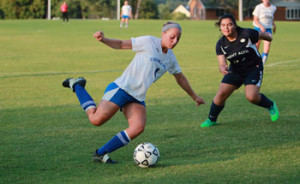 On the women’s side, an undefeated record speaks for itself. After five games, the women’s team has an overall record of 4-0-1, highlighted by the Lady Crusaders’ 2-0 win over Trinity University this past Saturday. With goals from Anne Nelson and Mary Grace Handy, the Crusaders held strong defensively against Trinity, with goalkeeper Madeline Hill achieving her fourth shutout of the season so far.

The Christendom Crusaders have taken top spots in USCAA national rankings numerous times in years past, both for individual and team achievements. Whether being named players of the week, All-Academic award-winners, or to All-American teams, Christendom’s athletic talent is making waves on a national level.

The men’s soccer team will next play at Appalachian Bible College on October 2, while the women’s team will take on Trinity University again on their home turf on September 30.