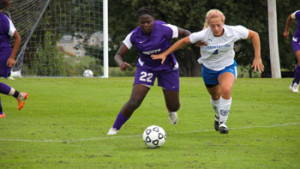 The Lady Crusaders soccer team refused to give up a single goal against Trinity University for the second time this season, finishing their away game 6-0 on Wednesday, September 30. The victory brings the Lady Crusaders, ranked #8 in the nation by the USCAA, its fifth shutout of the season and continues its currently undefeated record.

The Lady Crusaders began the game strong, maintaining possession of the ball through most of the first half. The Lady Crusaders opened their scoring in the sixteenth minute, thanks to a goal from Anne Nelson off of a through ball from Bryn Burgess. Nelson scored another goal in the last five minutes of the half, bringing the score to 2-0.

In the second half, Christendom picked up where they left off with two more goals, one from Mary Grace Handy in the fifty-eighth minute and a header from Bryn Burgess, ranked #9 in goals scored in the nation, in the sixty-first minute. Catherine Gaetano tallied the fifth goal of the game, before Mary Cook scored the final goal off a penalty kick.

The Lady Crusaders achieved their fifth shutout of the season so far, thanks to a fierce defensive line and nine saves from goalkeeper Madeline Hill — ranked #2 in the nation in save percentage. The women’s soccer team now has the best winning percentage in the nation, with an undefeated record of 5-0-1.

The Lady Crusaders will next play at Patrick Henry College on Saturday, October 3. For more information, please visit christendomathletics.com.